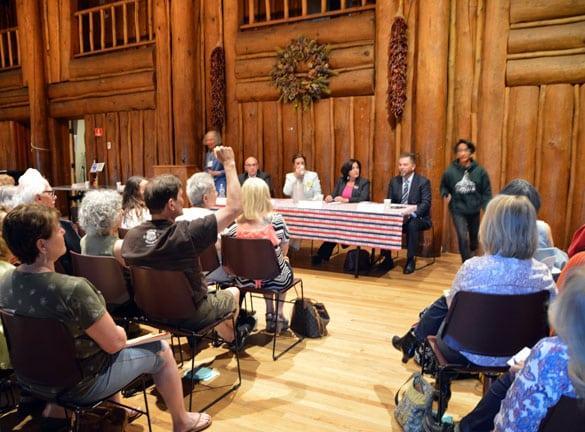 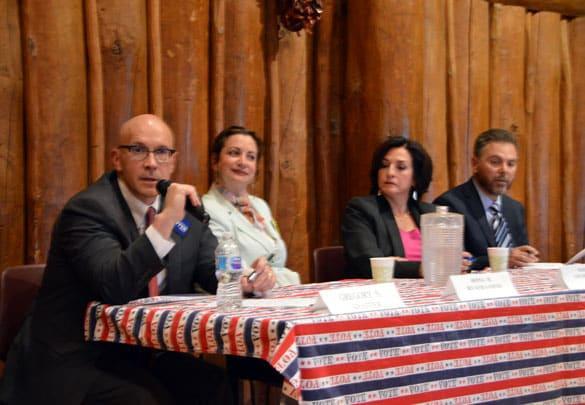 The second of two candidate forums was presented to Los Alamos citizens by the League of Women Voters Wednesday night at Fuller Lodge. The forum began with candidates for district court judge and concluded with candidates for N.M. House District 43. The latter are discussed in a separate report. As at the first forum, only those with opposition in the primary were invited, which meant all the candidates at the second forum were Democrats.

Candidates for District Court Judge, First Judicial District Division 2 are Donna Bevacqua-Young, Maria E. Sanchez-Gagne, Jerry Archuleta and the current sitting judge, Gregory S. Shaffer, who was appointed after being chosen through a merit selection process to fill a vacancy.

Shaffer pointed to his 20 years of diverse experience as a litigator at a national firm, a government lawyer in New Mexico and a judge. Shaffer was raised below the poverty level by a widowed mother. His mother and his experiences have taught him to live be three principals: so respect, work hard and judge things on the merits.

“Judges matter,” Shaffer said. “They are important to our democracy and our society.”

He urged voters to ask themselves, “If you were sued, who would you want as your judge.”

Bevacqua-Young has been a magistrate court judge in Santa Fe for four years, deciding on four to six thousand civil cases, she said. Bevacqua-Young pointed out that she is the only judge of the group to have been elected. She has been both a teacher and a student at National Judicial College and brought those skills back to Santa Fe, she said.

Sanchez-Gagne is a native New Mexican and is bilingual in English and Spanish. She said she would bring needed diversity to the bench.

“If a person does not speak English, I can look them in the eye and speak to them,” she said.

Currently, Sanchez-Gagne is the Alternative Dispute Resolution Officer for the Office of the State Engineer where she works to resolve complex water issues. Sanchez-Gagne is proud of having established the Border Violence Division in the Attorney General’s Office. She has experience in both criminal and civil cases.

Archuleta was born in Los Alamos. After serving 11 years as a Santa Fe police officer, he went to law school and served as a prosecutor for three years in Albuquerque. Archuleta is in private practice where he handles a wide sampling of civil cases, he said. He also has experience as a mediator and said he prides himself on being a leader.

“I promise to be vested in the community,” he said. “I’m compassionate, hard-working and driven. Managers maintain the status quo, leaders make it better.”

All the candidates said they would be happy to hold court in Los Alamos rather than in Santa Fe, if appropriate.

When asked how they planned to handle litigants who are representing themselves, Sanchez-Gagne said she has a lot of experience with self-represented litigants.

“Everyone should have access to justice,” she said. “I will work with people so they understand the process. We need judges who will take the time so do this.”

Sanchez-Gagne said she would bring mediation into the process early.

“Misunderstanding is often the root of conflict,” he said.

“I have the greatest empathy for self-represented people,” he said. “If someone is sued by a well-funded party for debt, they have no money to hire an attorney.”

Bevacqua-Young also pointed to the lack of resources for low income people representing themselves.

“I will carefully explain the procedural information to all parties,” she said.

When asked whether judges should be elected or appointed, the candidates said it was often challenging, because voters ask about specific cases, which they cannot discuss.

Bevacqua-Young said the appointment process may also be tricky because it can get political.

“I’m grateful we have the opportunity to go before the voters,” she said.

Archuleta said he enjoys talking with voters and believes in the importance of elections.

Schaffer pointed out that election of judges is also challenging for voters, because they don’t know what to look for in a judge and don’t know their qualifications.

Jason Lidyard and Mathew Jackson are the candidates for District Court Judge in the First Judicial District Division Five. Lidyard is the sitting judge, having been appointed last month through a merit selection process to fill a vacancy.

The bulk of the cases this court hears are criminal cases, Lidyard said.

“Having served as criminal trial prosecutor, I know how important it is to have a capable, compassionate judge dealing with these cases,” he said.

Jackson was formerly assistant attorney general before entering private practice. A judge should be a generalist, and he fits the bill, Jackson said.

“This court has a heavy criminal docket, but it is not exclusively criminal, he said.

The candidates were asked about the backlog left by the absence of a judge in the district for the period before Lidyard was appointed.

Jackson said he would work long hours to make sure that civil cases do not languish. These cases often lag far behind criminal cases, which must be tried swiftly.

Lidyard said criminal cases were up to date and he was holding court through the week to make sure civil cases are tried in a timely manner and prioritizing those that need to be heard soonest.

Both candidates said treatment of drug issues and mental health concerns are not solved through incarceration. Both would like to see treatment options become more available so judges can have options in sentencing.

In closing, Jackson pointed to his breadth of experience vs. the more focused experience of his opponent and his experience with high stakes litigation.

Lidyard highlighted his seven years as a prosecutor.

“These are human issues, not just a matter of dollars,” he said. 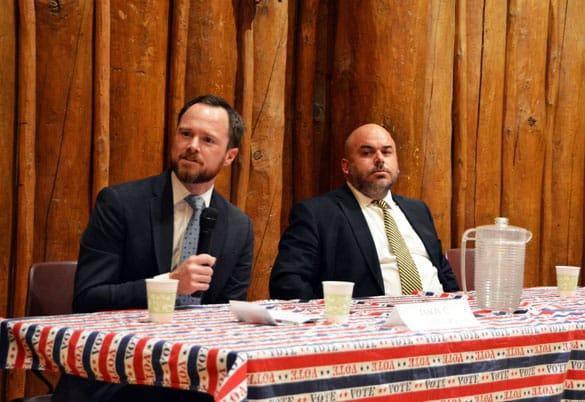 Jason Lidyard, left, and Mathew Jackson are candidates for District Court Judge in First Judicial District Division Five. Lidyard is the sitting judge, having been appointed last month through a merit selection process to fill a vacancy. Photo by Carol A. Clark/ladailypost.com 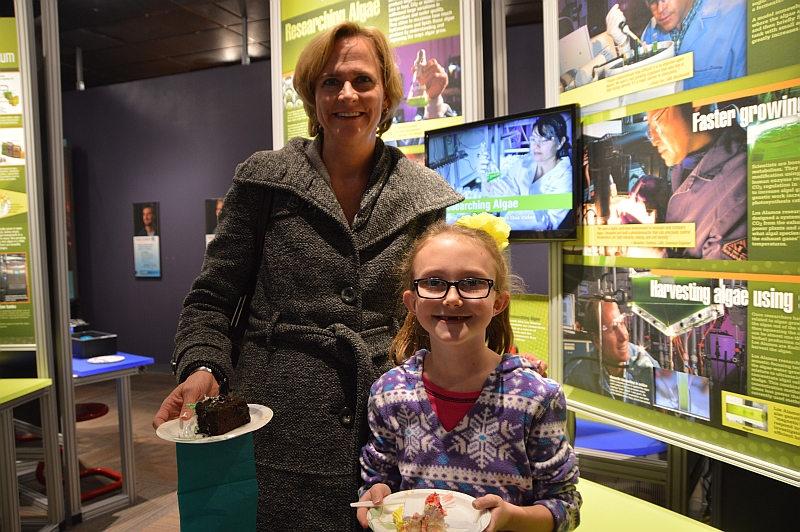 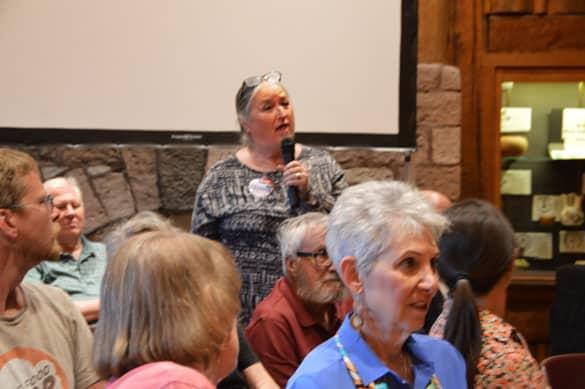 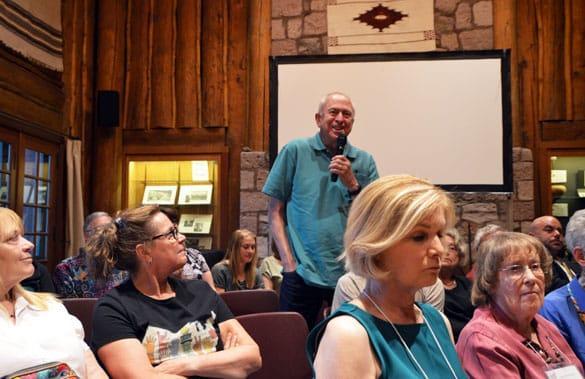 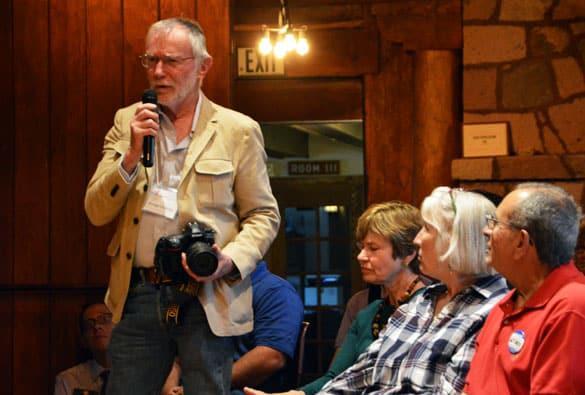