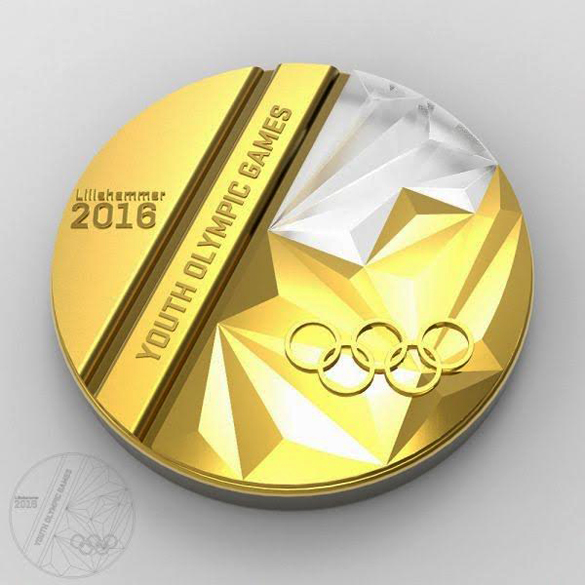 The winning medal design for the Youth Olympic Games/Lillehammer 2016, titled ‘To the TOP’ by Burzo Ciprian of Romania. Courtesy/meltwaterpress

“To the TOP” by 20-year-old Burzo Ciprian from Romania was chosen out of more than 300 entries from 65 nations as the medal design for the Youth Olympic Games in Lillehammer in 2016.

“For me was one of the best feelings I’ve ever had after I was announced as the winner. It’s a nice moment because I know that my design will remain in the history of Olympic Games and Youth Olympic Games,” Ciprian said. “I feel proud for what I have done.”

Judge Sonali Prasad, a young reporter from India, commented on Burzo’s design: “Burzo’s design was very unique and contemporary, keeping in mind the spirit of the Youth Olympic Games. We were looking for something different, something that represents all the elements of the Games; something that the young champions would be able to take back home not only as a sign of their victories, but also as a token that would symbolise the memories of their time at Lillehammer 2016. It gives me happiness to see a young 20-year-old capture all that and much more in his winning design.”

Judge Luke Dufficy, an Australian young reporter commented: “It’s slick and modern, but not too complicated. I think the Medal Design Competition has been great. The number of responses shows how the Youth Olympics have grown and how many talented, passionate designers are out there.”

Judge Jessica Fox, an Australian Young Ambassador, has seen a few medals in her career, including a Youth Olympic gold at Singapore 2010 and Olympic silver from London 2012 in canoeing; she liked Burzo’s design so much she said: “I would love to win one!”

The judges also selected two runner-up medals. In second place was “Four Elements” by Dora Korponay, 45, from Romania, and in third place “And still I rise” by 22-year-old Nikhil Bapna from India.

It was a tough decision for the winning medal but Burzo’s design shone through, as judge Mothusi Ramaabya explained: “[This design] broke new ground. It has an ability to stand out on its own when placed next to other medals and I felt that it captured Lillehammer 2016 uniquely and creatively.”