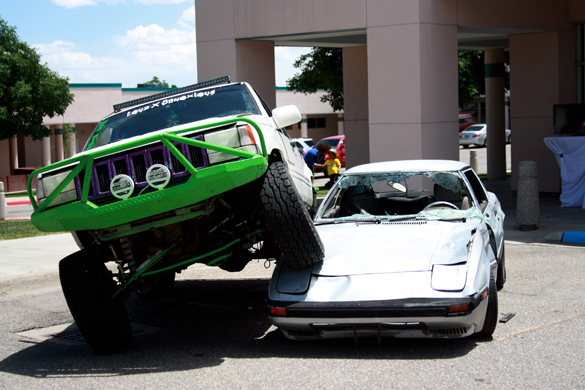 A sentencing hearing for Allan Houle was commenced and continued Wednesday morning by First Judicial District Chief Judge Mary Marlowe Sommer at the Los Alamos Justice Center. Under the terms of a plea agreement, Houle had pleaded guilty to two counts of trafficking of a controlled substance and five counts of use or possession of drug paraphernalia were to be dismissed.

The sentence for each count was to be nine to 18 years with five years supervised probation and under the agreement, Houle would serve a maximum of four years on each count.

Deputy District Attorney Kent Wahlquist asked the Court to impose the maximum of four years in the Department of Corrections stating that both counts were as a result of controlled buys made by the Los Alamos Police Department through a confidential informant (CI). He said in the first incident, the CI was able to buy methamphetamine from Houle and in the second incident Houle sold heroin to the CI. Both buys were recorded by the CI who was equipped with LAPD video recording devices.

Wahlquist told the Court the reason he was asking for four years is that this was not the first time Houle had been in trouble. He described previous charges including other controlled substance buys made from Houle, which were bound over from Magistrate Court to District Court but did not make it to trial because the CI who had testified at the Magistrate Court preliminary hearing had decided not to cooperate any longer.

Wahlquist said another reason he was requesting four years was Houle’s condition since his arrest on the two counts.

“He hasn’t gone into treatment since his arrest. He did nothing to address whatever drug issues he has. He believes he found out who the CI is and made contact with this CI and threatened the CI,” he said.

Wahlquist presented three witness statements from the alleged incident where Houle threatened the person he believed was the CI. Although Wahlquist claimed they were disclosed to the defense, Houle’s attorney Sam Roule claimed he had never seen them.

Wahlquist told the court he didn’t want to say the names of the three witnesses because Houle believes one of them is the CI. He said Houle came in contact with the person he believed to be the CI and “pointed his finger at the person and threatened their family”. He said the person was so scared they left the scene.

“The reason myself and law enforcement decided not to file charges is that we believed that whatever sentence happens here would deal with whatever issue caused the defendant to act out,” Wahlquist said.

Wahlquist said that from the presentence report from the Department of Probation and Parole, it is very clear that Houle is not taking responsibility for his actions.

“He’s blaming who he believes to be the CI. The probation officer expressed concern about his demeanor when he said he knew who the CI was. That’s concerning,” he said.

Wahlquist said Houle deserves four years in the Department of Correction because of his criminal history.

“He’s actually escalating, blaming other people for his actions and escalating to the point of threatening violence,” he said.

Roule told the court there are some inaccurate statements in the witness statements Wahlquist produced and which Houle “vehemently” denies.

“He was at a park and as the court well knows, this is a very small community. The identity of the CI was confidential in nature but beyond that it was not confidential,” Roule said. “My client was at this park when this alleged incident occurred, and he is prepared to tell the court today his version of events. He raised his voice and said, ‘Get away from me!’”

Judge Marlowe said the issue was “pretty important” to her decision on sentencing.

“So, you’re going to have to get these people here for cross-examination,” she said, referring to the three witnesses discussed by Wahlquist.

“I believe that would be inappropriate, your honor, a cross-examination at a sentencing?” Wahlquist said.

Judge Marlowe Sommer informed Wahlquist that a cross-examination can be held any place.

“You want me to rely on these statements. They’re statements, okay? You’re asking for four years in the Department of Corrections on three pieces of paper. I want these people here and yes, you can cross-examine them,” she said.