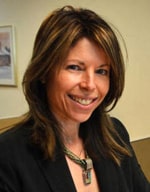 County Councilor Susan O’Leary
By CAROL A. CLARK
Los Alamos Daily Post
caclark@ladailypost.com
‘What we have learned is that IPRA cannot be used as a tool for harassment.’ –Attorney Kate Ferlic

This case stems from an email Plaintiff Patrick Brenner sent May 15, 2017 to Los Alamos County Council members at their County email addresses. The subject of that email was “You people continue to disgust me”. It contained pointed criticism expressed in personal terms concerning issues with the Office of Sheriff and upcoming bond election. Among other things, the email said, “You are disgusting. Terrible people. Disgusting, deplorable, despicable. You are a total embarrassment to Los Alamos and the State of New Mexico.”; and “SHAME, SHAME, SHAME, SHAME, SHAME, PIGS.”

Brenner’s email was published that evening in the Los Alamos Daily Post. The Brenner’s filed an IPRA request with the County Records Department requesting all emails sent and received  from councilors that day.

O’Leary declined to release her private emails from that day and the Brenner’s sued.

The judge ruled Wednesday that all emails sent and received May 15, 2017 from O’Leary’s private email are not public record with the exception of two emails sent that day between O’Leary and County Election Manager Gloria Maestas.

“I am thrilled with this victory,” O’Leary told the Los Alamos Daily Post today. “I hope that in the future the County Council can come together to support one another against harassment and bullying. In the interest of this great community, I hope we can all move forward to address the pressing issues of the County.”

One other email was found exempt from the case. Court documents state that, “Ms. O’Leary also forwarded Mr. Brenner’s email from her private account to Carol A. Clark of the Los Alamos Daily Post. Ms. O’Leary deleted this email before she was aware of Mr. Brenner’s IPRA request. She was unable to retrieve a copy from Ms. Clark. As a result, the court need not address this email, since IPRA applies only to public records that exist at the time of the request.”

Attorney Kate Ferlic of Egolf + Ferlic + Harwood Attorneys at Law, represented O’Leary in this matter and spoke to the Los Alamos Daily Post today about the case.

“Susan feels vindicated. Susan complied with all applicable laws and produced all necessary  records,” Ferlic said. “Susan is certainly a strong woman of principle and has shown she will tackle bullying head on. What we have learned is that IPRA cannot be used as a tool for harassment.”

The Los Alamos Daily Post reached out to County Public Information Officer Julie Habiger about the court ruling on this case and she said that the County declines to comment at this time.