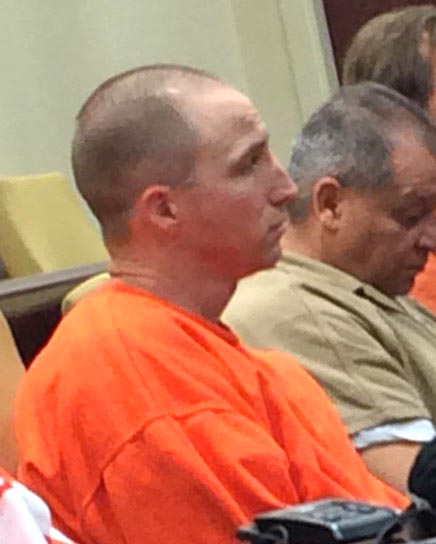 Jeremiah Colson, 36, of Albuquerque had been conditionally released on bond in November pending the outcome of a drug trafficking charge from July 2016 in Los Alamos. He was arrested Dec. 27 in Rio Arriba County on charges of trafficking of a controlled substance and use or possession of drug paraphernalia and was transported Dec. 29 to the Los Alamos Detention Center by New Mexico State Police.

Soon after Colson’s arrival at the Los Alamos County Detention Center, Sgt. Timothy Lonz was notified that Colson had allegedly been found with a homemade knife on his person. The criminal complaint filed in Los Alamos Magistrate Court says the knife was made from a “copper spike with black tape handle and green rope”. The statement of probable cause states that “when asked by detention personnel if he had any enemies, Jeremiah stated he didn’t get along with some of the inmates” and added that he “did not give any information as to who the people were.” Bringing contraband into a jail is a fourth degree felony.

At Monday’s status hearing before Judge T. Glenn Ellington, Colson’s attorney Shannon Robinson asked for his release. Deputy District Attorney Johnn Osborn said Colson denied his violation of probation on Jan. 23 and that the deadline for an evidentiary hearing without a waiver is March 24. He asked to set a date for another status hearing in late February or early March to allow work on a global plea to include the new charges. Colson has had his first appearance on the Rio Arriba County charges before Judge Joseph Madrid in Magistrate Court but has not yet had a preliminary hearing.

Robinson said he wanted to ask for Colson’s release and that he would be representing him on the new charges as well.

“It would be important for us to try and secure his release today. Several significant things have happened to Mr. Colson; he is now receiving medication for anxiety and PTSD. He is a Navy veteran and so that’s an important part of his stability. Plus since Dec. 27 he has been in custody so he is sober,” Robinson said. He added that Colson’s fiancée lives in Albuquerque and that he would like the court to continue his release and allow him to live there with her and enter a Salvation Army treatment program.

At Osborn’s request the judge heard from a representative of the Department of Probation and Parole who said they were opposing the proposed release because they wouldn’t be able to “adequately supervise him” in Albuquerque, adding that “he was pulled over with weapons and drugs” and that “his probation violations are pretty severe.”

Osborn said the District Attorney’s Office also was opposed to Colson’s release. Robinson stated that is was his best opportunity to show stability for his client adding that “he just got started on probation when this happened.”