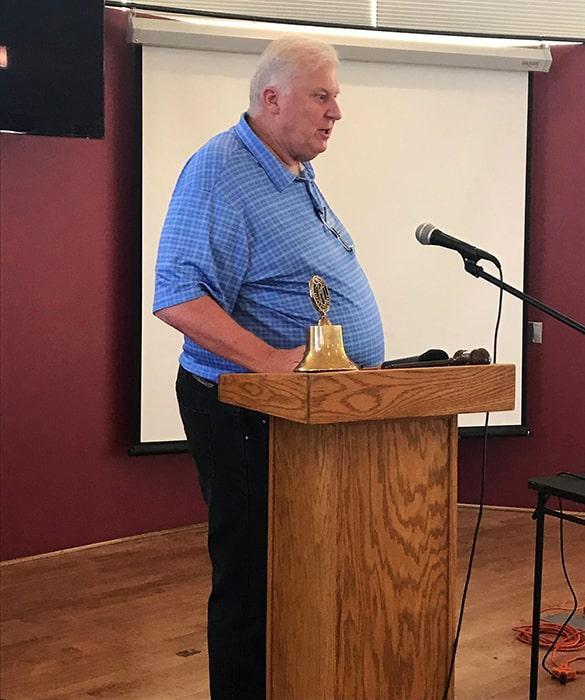 Los Alamos Municipal Judge Alan Kirk discusses the opioid issue during his talk at the Tuesday meeting of the Kiwanis Club of Los Alamos. Photo by Maire O’Neill/ladailypost.com

Los Alamos Municipal Judge Alan Kirk is investigating regional collaboration as a way to deal with opioid addiction in Los Alamos County and the surrounding area.

Judge Kirk addressed the issue at Tuesday’s meeting of the Kiwanis Club of Los Alamos. He told the group that people think of heroin, Oxycontin and Percocet as being “the bad ones” but that there are more than 50 drugs that are considered opioids and that he was shocked when he saw the list.

Judge Kirk said when people become addicted to opioids it becomes very expensive and they can’t continue to get prescriptions, so they go to the street where tablets are expensive, and they can’t afford them. He said what you see now is that they turn to heroin, adding that with many opioid deaths, multiple drugs are involved.

He said in May there were 57 bills in Congress seeking to combat the opioid crisis. In the region, he said New Mexico is leading the pack with 500 deaths in 2016. He said Los Alamos had an opioid death rate of 16 people between 2001 and 2016, placing Los Alamos close to the national level of 16.3 when Los Alamos is usually lower than the national level. The state rate for the same period is 24.6.

Judge Kirk said of the 500 New Mexico deaths, 450 were unintentional – people who didn’t intend to overdose but ended up dying as a result of their drug use.

“That’s huge. That’s an educational issue – it’s not having services or medical help available, ” he said.

Judge Kirk discussed how Los Alamos County placed higher on the list of opioid overdose related emergency room visits from 2012 to 2016, which made him question if they were local people or regional and if people are coming to Los Alamos to receive services. He cited steps being taken by the state Department of Health such as ensuring fewer prescriptions are being written, monitoring prescriptions, trying to increase access to opioid reversal drugs such as Naloxone and Methadone, increasing the availability of outpatient treatment and medications in the hope of dropping the death rate to 17.5 per 100,000.

Judge Kirk said the Los Alamos Municipal and Magistrate Courts are involved because of the pretrial supervision program where a judge may elect to place someone under the supervision of a probation officer to meet on a daily or weekly basis, depending on what their issues may be. He said as of June 1, 67 individuals are under pretrial supervision and that number has been as high as 130 in years past. He said 30 are Los Alamos residents and the other 37 are from outside the County. Of the 67, 16 are dealing with drug addiction, 35 with alcohol addiction and 24 with behavioral issues.

“This is really where we have an issue. Los Alamos does not have inpatient treatment. We have to rely on Taos, Santa Fe and Rio Arriba because that’s where the beds are. So, we’re on the second layer when we try to find someone assistance,” he said, adding that some 96 percent of those on pretrial probation have some kind of issue that needs to be addressed.

He said how it affects him is that his maximum sentence is 90 days and that if he puts someone in jail he knows they are not going to use for those 90 days but that they’re not going to receive services.

“So, what’s going to happen is they’re going to dry out and then get back out on the street to exactly where they were to start with and start reusing. We’ve got to get them treatment before they get out of jail and this is a really challenging issue we’re going to have to address aggressively,” he said.

Judge Kirk said the treatment facilities want to know how they are going to get paid for their patients and usually won’t take anyone until that is resolved so that can mean waiting as long as 60 days for a bed. He said people also need aftercare programs to make sure that when they leave their inpatient treatment, they have a mechanism to help them otherwise they are going to get right back into the same issues.

“We need case management. What I am trying to find and put together is someone who can step in immediately after sentencing and work with an individual for a short period of time until we can find a permanent solution. Right now, they disappear and we need to figure out how to get them from point A to point B because otherwise they are going to reoffend,” he said.

“It’s got to be regional. We’ve got to partner with other agencies. Santa Fe jail has 700 inmates in their jail.  They have psychiatrists, therapists, case workers and reentry specialists all working around the jail and 80 percent of their inmates have behavioral health or mental health related issues,” Judge Kirk said.

He said Rio Arriba County just hired a case manager and when he asked what they do for inpatient services and he was told, “Stand in line like everybody else”. He said he found out that Rio Arriba County transports their inmates to Carlsbad for treatment because they found a facility there that will take them, so he has the jail staff transport them there.

Judge Kirk said a lot of people don’t understand that when you put somebody into jail they become a burden on the County.

“Their medical expenses, anything that has to be paid for comes at the expense of the County. The faster you can get them transferred to an impatient treatment program, the faster it saves you money,” he said. He said what the Rio Arriba County jail manager told him was that the inmates went to the Carlsbad facility so that they didn’t have to be transported to the hospital in Espanola from Tierra Amarilla to get medical services, that he would have to pay for services to come up to the jail in Tierra Amarilla to serve them, making it worth every dime to provide transportation to get them to Carlsbad.

Judge Kirk said sometimes he thinks a little outside the box. He said he told Santa Fe they have a nice program and asked if he could rent it, if they would come up to Los Alamos for a day and provide a day of services.

“The response started out with, “You’re crazy,” then went to “No,” and ended with, “Let’s think about it,” he said. “We’re in dire need just like every community in the country right now in dealing with opioids.”

“I don’t know if we need a strategic plan for dealing with opioid addiction in Los Alamos County,” he concluded. “I can definitely tell you we need a regional plan to deal with. We have had 37 people come in and receive police and court services that don’t live in Los Alamos, so you’re seeing overflow into our county or they work here during the day, or there may be other issues that brought them to Los Alamos and we’re going to have to cover them.”