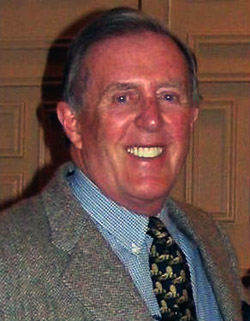 Seating is limited, and tickets are going fast. Reservations must be made by Jan. 9. Ticket prices are $100 for members, $125 for non-members, and tables may be purchased at a discount for parties of 8-10. Reserve seating by going on line at sfcir.org or by calling 505.982.4931. You may also sponsor a student with a $100 donation.

Stewart has had a distinguished and dual career both as a Foreign Service officer with the U.S. State Department and as a correspondent and bureau chief with Time Magazine. In the 1960s, he was posted by the State Department in Washington D.C., as well as New Dehli, India, and in Vietnam, among other countries. Stewart also served  the State Department as Special Assistant to the deputy director of intelligence and research. He joined Time Magazine in 1971, and for the next 25 years was a correspondent and bureau chief in India, Japan, the Middle East out of Beirut and Southeast Asia out of Hong Kong.

Following his multi-varied career with Time, Steward semi-retired to the Sante Fe area, where he writes a column for The New Mexican and can often be heard on KSFR.

The International Visitor Leadership Program brings opportunities for CIR members to engage in “citizen diplomacy” with foreign visitors. In 2012, CIR hosted 231 international visitor leaders sponsored by the U.S. Department of State. This program involved an estimated 10,300 hours of local volunteer service and a total economic impact for Santa Fe of $474,290.

In 2014, CIR has more than 500 members, mostly local residents and includes many of Santa Fe’s more influential and civic-minded citizens.

For more information about CIR’s 50th Anniversary Celebration, go to the Council’s website at www.sfcir.org or telephone the office at 505.982.4931.