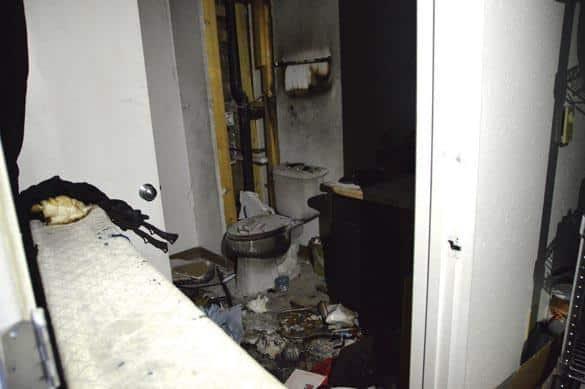 The bathroom where an explosion from a marijuana wax process occurred in May 2016 at the Caballo Peak Apartments on Canyon Road. Photo by Carol A. Clark/ladailypost.com
By MAIRE O’NEILL
Los Alamos Daily Post
maire@ladailypost.com

Gonzales was originally charged with endangering human life while illegally manufacturing a controlled substance, manufacturing a controlled substance and maintaining a drug-involved premises in an indictment unsealed July 31. Federal documents accused him of maintaining an apartment at 3301 Canyon Road in Los Alamos for the purpose of distribution, storage and use of marijuana and hash oil.

May 9, 2016 at 1:24 a.m. an explosion occurred at the apartment and immediately afterwards Gonzales was transported to a hospital in Denver, Colo. for treatment of his injuries which included a deep cut to his leg and several burns. The apartment sustained some $100,000 in damage and the explosion was strong enough to break the floor joists.

Los Alamos Police Department records indicate they believe Gonzales entered the master bathroom at the apartment for the purpose of smoking marijuana using a large glass smoking device. They also allege that while smoking his product, there was butane throughout the residence, which ignited “upon Joseph lighting his product, causing an explosion and fire”.

Court records filed by LAPD Det. Joseph Robinson indicate that when he arrived at the apartment at around 1:44 a.m., he noticed a room on the west side of the building that was believed to have been occupied by a child in which the window and frame had been blown out of the wall by the blast and were resting 10 to 15 feet from the building. The ceiling also appeared to have separated from the walls during the blast.

Robinson also observed that the right side of a window to the living room also was blown out as well as the window to the master bedroom, and that there was damage to the structure pillar outside. Several items had been blown through the window including minor computer equipment and two cell phones. He also observed that the master bathroom door had been blown off and that there was a silver-colored device in the middle of the bathroom and a pot with a heating device attached to the bottom.

Among other items, LAPD officers found bags of unused hypodermic needles, a safe containing several cell phones, a large amount of money, sealed baggies of a green leafy substance, a white powdery substance, a glass smoking devices and a grinder.

In addition to the LAPD, the case was investigated by the Bureau of Alcohol, Tobacco, Firearms and Explosives. Assistant U.S. Attorney Letitia C. Simms is prosecuting the case. No date has yet been set for sentencing.