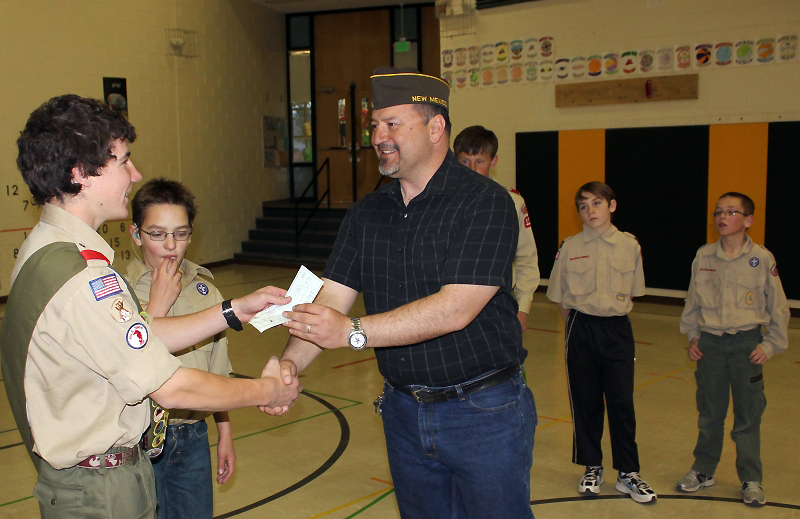 The New Mexico Veterans of Foreign Wars has selected Los Alamos Eagle Scout Jonah Katz as their nominee for the national VFW Scout of the Year Award.

The VFW has identified Katz as an exceptional leader who has attended all three Boy Scouts of America major high adventure bases – Philmont, Sea Base and Canoe Base. His leadership is highly regarded by his peers and was unanimously selected as “Crew Chief” by the other scouts in his crew during his trips to Philmont and Sea Base.

Katz was honored as a recipient of the Baden Powell Award in 2009, and during his first term as the Senior Patrol Leader, was awarded the Outstanding Senior Patrol Leader Award for Northern New Mexico in 2011. He was the recipient of the Northern New Mexico District Eagle Scout Scholarship for 2013. Additionally, Katz is a member of the Order of the Arrow, Boy Scouting’s National Honor Society.

Katz has been hiking and camping with White Rock Boy Scout Troop 129 since he was a WEBELOS Scout, and helped both his brothers achieve the rank of Eagle Scout by assisting with their Eagle Scout projects. When it came time for Katz’s Eagle project, he chose to support Bandelier National Monument in helping to reopen different areas of the park after the devastating Las Conchas Fire of 2011. Katz and his team painted signs in the park, which are important to the visitor experience, allowing the park to re-open both Frijoles Canyon and the Juniper Campground.

Katz is active in his youth group at the Los Alamos Jewish Center, has served for numerous years as a participant in High Holiday services, and has organized cleanups of the Jewish Center’s grounds. He is a student member of the Los Alamos Community Winds, one of less than 10 students in a school of over 1,000 students to be so honored. He graduates from Los Alamos High School June 1, and will be attending New Mexico Institute of Mining and Technology.

The membership of the John D. Gamble Post 8874 of the Veterans of Foreign Wars is very proud to have Katz representing them, the Los Alamos community, and the State of New Mexico in the national VFW Scout of the Year Program. Katz has received $100 from Post 8874 for winning the competition at the Post level, and will receive $500 for his first place win from the New Mexico VFW later in June at the VFW State Convention in Albuquerque. The national winner will be announced in July.