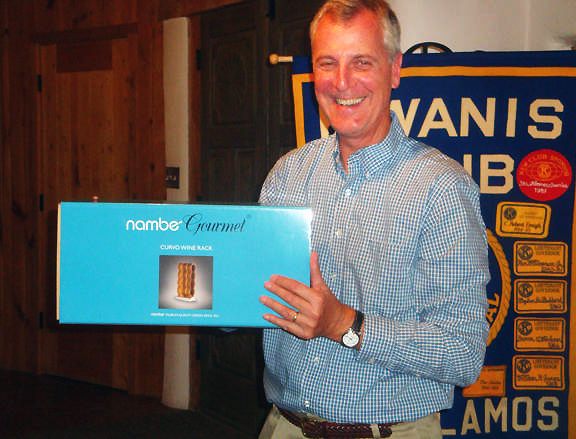 John Arrowsmith, above, is the Kiwanian of the Year for 2017-2018. He has a long history of devoted service to Kiwanis. Courtesy photo
KIWANIS News:
John Arrowsmith,  the 2017 Kiwanian of the Year in Los Alamos, is no newcomer. He has lived in Los Alamos County for 27 years, and he has been a member of Kiwanis here for about 25 years.
However, there are many things about him that even a Kiwanis member might not know. Although he is a native of Connecticut, Arrowsmith earned an undergraduate degree in accountancy and a master’s degree in business at New Mexico State University (NMSU) in Las Cruces. He met his wife, Mary, at NMSU.
Subsequently, he worked for about a year for the Hartford Insurance Group in Connecticut, then returned to New Mexico, where he worked for PNM before joining the Los Alamos County Utilities Department as deputy utilities manager for finance.
Eventually, he became head of the Utilities Department and served six years in that post before retiring.
He has been a member of the Kiwanis Club of Los Alamos since 2001—and before that, he was a member of the Sunrise Kiwanis Club (an early morning club that folded into the Los Alamos club in 2001).
He served as president of the Sunrise Kiwanis Club twice, filling out the term of Wally Walters, who died in office, and then serving as president the next year, too. In addition, he was president of the Kiwanis Club of Los Alamos in 2009-2010.
He and his wife, Mary, raised two sons in Los Alamos County. Nathan and Sam were 5 and 3, respectively, when the family moved here. Both of them are now attorneys in Phoenix.
More recently, Arrowsmith has been chairman of the Kiwanis Pancake Breakfast Committee for about three years.
This year, he served on the House Committee, and he helped with Senior Appreciation Night and Breakfast with Santa. He worked at the gate and helped with fireworks setup for the Kiwanis Fourth of July Festival at Overlook Park. And he and Mary were the hosts for the annual Kiwanis Picnic and the Installation Potluck.
Asked the reasons for his many years with Kiwanis, he commented that he was asked to join the club by a friend who was a consultant to the county. He added, I really enjoyed the project we worked on that year – Breakfast with Santa at the old Montoya’s Restaurant. He also worked on “early-day fireworks.”
The Sunrise Club’s 6:30 a.m. meetings were no problem for him, he said. “I’ve always been a morning person.” He gets up at 5:30 a.m.
Asked about his philosophy on Kiwanis in general, he said, “There’s so much service that’s needed in the community, and volunteerism in our society as a whole is going down”. He said he is glad to be doing things that need doing—such as painting the Band Room at the high school and collecting books for the African Library Project.
You might think that with all that work for Kiwanis, he wouldn’t have time for other activities, but Oct. 17, he will be the club’s speaker—telling about his experiences working as an extra in “Only the Brave,” a film about the courageous firefighters who died on Granite Mountain in Arizona.
Was it a surprise that outgoing President Chuck Kooshian chose him for Kiwanian of the Year? Arrowsmith said, “Yes, it was a surprise, because there are so many people who do so many things in the club.” Kooshian, however, had no doubts. He noted Arrowsmith’s “devotion” to Kiwanis, and he told the Newsletter, “He was always there when I needed something.”
Menu
LOS ALAMOS