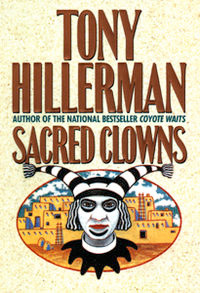 ‘Sacred Clowns’ is one of the Tony Hillerman novels recently donated to the Jemez Springs Public Library by Anne Hillerman. Courtesy photo

September is officially National Library Card Sign Up Month and what better way to celebrate than to comply with author Anne Hillerman’s request for everyone to read more. That was her only request for our library to accept her very generous and moving donation of her father’s books to the tiny library.

The Hillerman family has a bit of history with Jemez Springs. Back in 2002, Tony Hillerman was one of the stellar trio of New Mexico authors-Rudolfo Anaya and N. Scott Momaday were the others- who were part of the first Tri-Cultural Symposium presented by the Jemez Springs Public Library and Friends of the Library.

The brainchild of local resident Morris Taylor, the event was a huge success with more than 500 attending and a recording of the event broadcast nationally on NPR.

Momaday and Anaya both lived in Jemez Springs and Taylor had a personal connection with Hillerman. They had gone on a group raft trip down the Colorado through the Grand Canyon in the 1990s and  remained friends ever since.

Anne Hillerman visited Jemez Springs in 2014 to give a talk about Spider Woman’s Daughter, the first in her series of books that continues the legacy of some of her father’s characters. And, when she was invited this year to reprise that original tri-cultural symposium for the library’s 50th anniversary celebration, she graciously accepted. This time, her father having passed away in 2008 and Anaya unable to come, the trio was Anne, N. Scott Momaday, and Nasario Garcia. It was an unforgettable day just as the first event had been.

Sadly, Marie Hillerman, Anne’s mother, passed away in the spring but Anne let us know that she had enjoyed visiting Jemez Springs with both Anne and Tony and had been fond of our small, friendly village.

As a result, as Anne sorted through her parents’ home, she asked if Jemez Springs Public Library would like some of her father’s personal library of his own editions and others’ books. The library and village staff was astounded by the kindness and generosity of her offer to such a tiny out-of-the-way library and was not sure exactly what to expect. In the end, the library collected many boxes of signed first editions by Hillerman, books inscribed to him by authors whom he had mentored, and a treasure trove of other materials.

It is a wonderful bequest that will benefit the library, community and patrons for many years to come as well as Hillerman researchers. Jemez Springs Public Library will keep many of the books and related materials on display and in circulating collections for all to enjoy as well as other materials such as book cover proofs, uncorrected proof editions, original magazine editions which include his articles, and some books will be sold.

Anne Hillerman is a dedicated advocate for public libraries and her only stipulation for the gift was to ‘encourage people to read more.’ Jemez Springs Public Library will certainly do that: run out to your nearest library and get ‘the smartest card!’ to enjoy Anne Hillerman’s books, her father’s books, authors whom he mentored, and to discover new favorites. Celebrate reading, New Mexico!