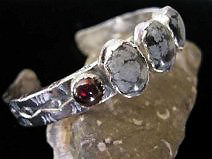 The Jean Cocteau Gallery inside the Jean Cocteau Cinema (418 Montezuma, Santa Fe) presents the work of the Taos Pueblo silversmith and photographer Wings, April 14-May 11.

Wings, a self-taught silversmith and professional photographer, is an enrolled member of Taos Pueblo, the People of the Red Willow. His heritage is exclusively Tiwa, which is his people’s name for their ancestry, their spiritual beliefs, and their native language, which he speaks fluently.

The third of seven children, Wings was raised in the family home at the Pueblo and grew up immersed in the Tiwa cultural, spiritual, artistic, and linguistic heritage. He and his family are “traditionals” and walk in two worlds: Although they live in contemporary society, they also follow the old ways that have sustained the Pueblo and its people for more than a thousand years. 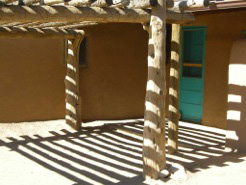 From his earliest memories, art has informed and shaped Wings’s life. As a child, he dreamed of attending the Institute of American Indian Arts in Santa Fe, but family finances put those dreams on hold. Growing up, Wings lived for a time in southern Utah, eventually working for a pipeline company and attending college.

As a young man, he subsequently spent four years in Boston. But while both places provided valuable experiences that shaped his life and his art, neither was home: Homesick for his land and his people, Wings returned to Taos Pueblo permanently, finding a renewed hunger – and a renewed inspiration – to focus on his art.

Back home, Wings held numerous jobs – in restaurants, as a laborer, as a paramedic – to make ends meet while working toward his ultimate goal of making a living as an artist.  For several years, he worked for the Pueblo’s Tribal Court as a juvenile probation officer and adjudicator of children’s cases, networking with Native justice system professionals around the country and gaining insight into other tribal traditions.

Those experiences reaffirmed his deep love for children, and his extensive work with at-risk youth further strengthened his sense of gratitude, responsibility, and hope for his people, and those passions infuse his art. And with the dawn of the new century, Wings’s lifelong dreams were realized: He now focuses exclusively on creating and selling his art.

Sterling silver is Wings’s primary medium, and he approaches it in the traditional fashion, using Native silversmithing techniques. All of his silverwork is hand-cut and hand-stamped; he uses only natural gemstones such as turquoise, coral, garnet, onyx, and other precious gifts from the earth.

In recent years, he has expanded his art to include photography, using the medium to illuminate Pueblo life and traditions, his people’s role in the natural world, and their relationship to the other two-leggeds and four-leggeds. He also plays the traditional Native flute, and continues to experiment with new media.

Wings draws his inspiration from the world around him: a ray of light … a passing shadow … the movement of the water that runs through the Pueblo and sustains its life … the flash of a dragonfly … the flicker of a bird’s wings, like a gentle heartbeat … the strength and grace of a running horse … the healing beauty of sage and Indian paintbrush … and always, always the lessons.

In his Artist’s Statement, Wings writes,

“When the world thinks of Taos Pueblo, the image that first springs to mind is that of our famed North House, Hlauuma. And with good reason: More than one thousand years old, it’s an iconic example of the architecture for which are people are known.

But that’s only the surface.

There is so much more to our ancestral lands, our sacred spaces, that people never see. Some of that is purposeful: Our traditions require privacy and secrecy, and there is much that is not available to outsiders. But even in the public areas of the Pueblo, what visitors see and what I see are two very different things.

“With this exhibition, I would like to take you on a journey.  I want you to see what I see, feel what I feel — the sights and sounds and smells and sensations of this place, this land, that has embedded itself in my blood and bone and that of my people for more than a millennium.

“The very earth, so sacred to my people that fills the spaces between the old earthen bricks of our homes:  It holds the walls together, yes, but this earth, this beautiful red earth, also links our homes and families and clans in an ancient structural embrace. It feeds us, nourishes us; it supports the walls and windows that keep the elements out but the good spirits, the beauty, the harmony within.

“The wood from the trees that have grown naturally on the sides of sacred mountains since before the dawn of time: The piñon poles, cut and stripped in the old way, become the vigas, the beams, that support the ceilings of our homes and enabled us to create the first multistory dwellings on this continent; the latillas of our fences and arbors, that provide safety from the surrounding wilderness and shelter from the sun; the traditional wooden ladders that kept our families safe in ancient times and to this day provide entrance and egress to sacred spaces.

“And all of it, bathed in the enigmatic light that is unique to Taos Pueblo, to the land of the People of the Red Willow, the magical light that blesses my body and spirit as I walk in the sun and fills my dreams at night with joy and mystery.

“Come with me. Let me show you this earth, this sky, this light that is wholly a part of me.”