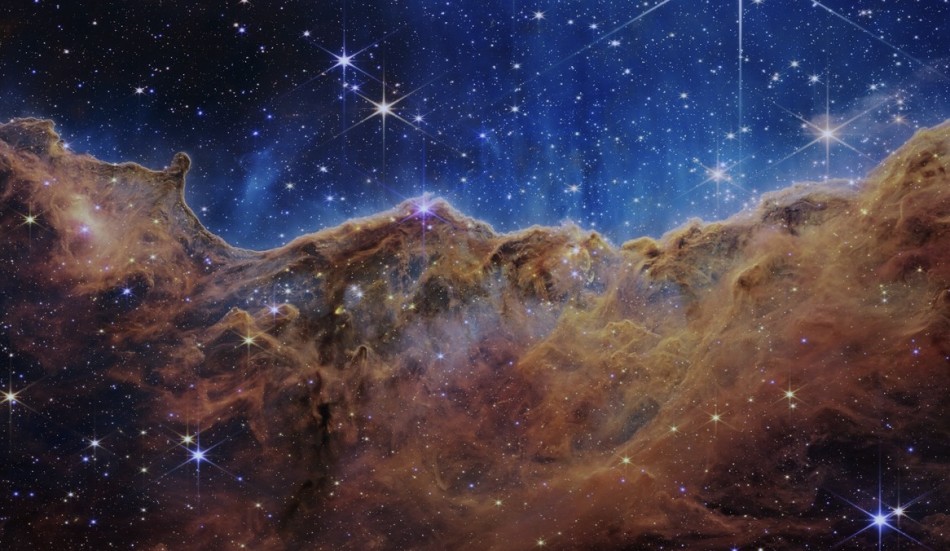 After 20 years and $10 billion, the unfolding of the 18 gold-coated beryllium hexagons of telescope’s sunflower-like mirror of the James Webb Space Telescope (JWST) in early January 2022 went flawlessly.

Like a modern-day Manhattan Project, the project involved an interdisciplinary team of engineers, astronomers, mathematicians, technicians, and government officials.

The telescope will allow scientists to peer back in time, detecting the earliest origins of the universe nearly 14 billion years ago. It also will help scientists explore galaxies, cosmic rays, black holes, and dark matter as well as exoplanets that orbit other stars that may sustain.

Above is an image of the “Cosmic Cliffs” that shows the edge of a young star-formation nursery, captured in infrared light by the NNSA JWST.

Manhattan Project veterans would have been thrilled with the success of the JWST. Before the Manhattan Project, J. Robert Oppenheimer, later director the Los Alamos laboratory, and Arthur Holly Compton, director of the Metallurgical Lab at the University of Chicago, led research on cosmic rays. Norman Hillberry, who studied cosmic rays with Compton in 1940, observed that, “Nuclear physics pretty well grew out of the cosmic ray business.”

Manhattan Project scientists such as Hans Courant, Ralph Lapp. Peter Vandervoort, and Maurice Shapiro had distinguished careers after the war focusing on cosmic ray research. In 1977, Shapiro founded the International School of Cosmic-Ray Astrophysics in Erice, Italy, and directed the school until his death in 2008.

Bill Ochs, the project director of JWST, said despite the difficulties the project encountered, there was never any talk of giving up or “failure.” After the launch, there were still 344 “single-point failures” that could jeopardize the whole mission. Fortunately, everything worked. So far, the JWST has exceeded expectations and promises to transform the understanding of the cosmos.