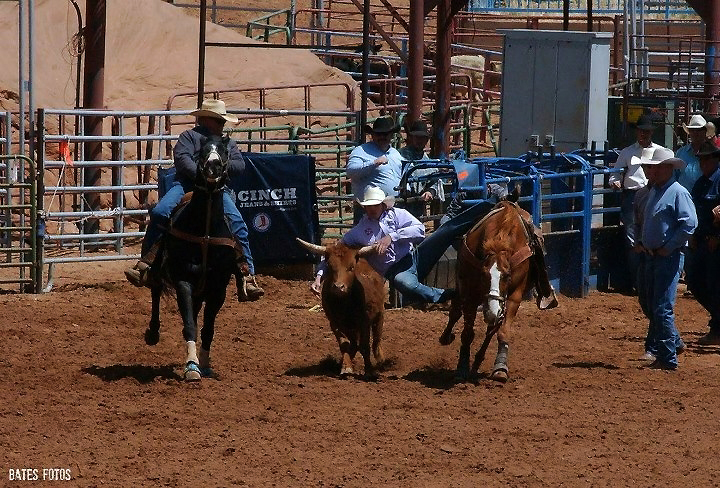 I am a graduating senior from Los Alamos High School. This year, I ended up reserve state champion steer wrestler and qualified for my third consecutive National High School Finals Rodeo.

This year we will be traveling to Rock Springs, Wyo. to compete with more than 1,500 contestants from 41 U.S. states, five Canadian Provinces, and Australia. The National High School Finals is the world’s largest rodeo. In addition, I get the chance to compete for a part of the $200,000 total prize money and prizes, and most importantly, the chance to become a National Champion.

I started throwing steers in the seventh grade, and jumped my first steer off horse back when I was a freshman. Steer wrestling consists of jumping off of a horse running at full speed onto a steer that is also running full speed and throwing him down. In this event the fastest time wins.

Steer wrestling has always been my passion and what I want to do. The adrenaline rush of jumping off of a running horse and the tough competition is what keeps me addicted to the sport. I have intense practices that include throwing steers on the ground (not off of a horse), and jumping steers regularly off of horses. The average weight limit for the steers we throw is around 350-475 pounds.

I am honored to be able to represent New Mexico and Los Alamos at a national level. Each performance is broadcast live on NHSRATV.com, then broadcast on national television later in the year on RFD-TV. The performances start July 14 and run for 10 consecutive days ending with the championship round, which the top 20 times/scores in each event compete for the national championships.