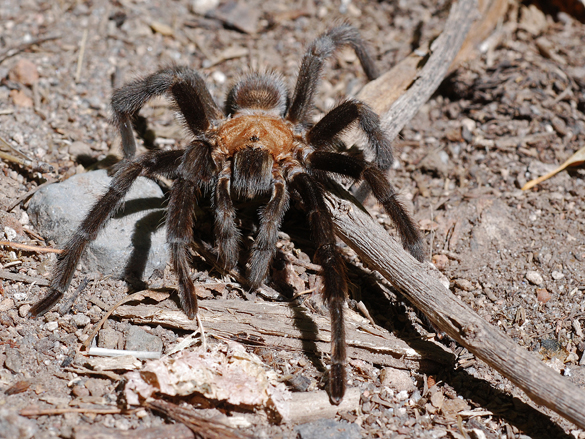 Tarantulas found in the Bandelier National Monument area. Courtesy/NPS Photo
NPS News:
Around here, in Bandelier National Monument and many other parts of New Mexico, everyone starts noticing tarantulas about this time of year.
Autumn is the time when males mature and start out on their quest to find a mate. This exposes them to many dangers, from hawks and skunks, which want to eat them, to fast-moving cars, to people who just find them creepy and may think they should be squashed.
Tarantulas have been around for more than 16 million years, and comprise more than 900 species found across the world. They do have venom, but in ones around here, it is about equivalent to a wasp sting unless someone is allergic to the proteins that accompany the venom. New world tarantulas also have barbed urticating (stinging) bristles, which they can brush from their abdomens in self defense; these are particularly harmful if breathed into the lungs, and can do permanent damage to eyes. But generally tarantulas are pretty easy-going creatures.
They are spiders, with eight legs, even though they have two other sets of appendages that sometimes make it look like they have 12 legs. Tarantulas are hunters, preying on such creatures as centipedes, millipedes, beetles, and even smaller spiders. In turn, they are considered food by predators including hawks, owls, coyotes, foxes and snakes. They are very long lived, given the chance; females may live 30-40 years, spending most of that time in their burrow when they’re not hunting. Males mature in 2-5 years and seldom live more than a year or so after that, partly because of having to go out into the world to find a female.
The wandering individuals seen in fall on the roads and elsewhere are almost certainly males, trying to reproduce in the short time available to them. The females stay at their burrows, and the males follow hormone scents to try to find them. If you see one of these males, be kind. Remember that all native creatures are protected in Bandelier National Monument.
If he’s in a dangerous location like a road, and it’s feasible, consider helping him across. Definitely be aware for your own safety – fast-moving cars aren’t good for people, either. Wear gloves, or find something flat for him to crawl onto. Place him off the road or trail in the direction he was traveling. Certainly don’t squash him. Let him proceed on his mission to provide future generations of tarantulas! Hopefully these big hairy spiders will share the earth with us for another 16 million years. 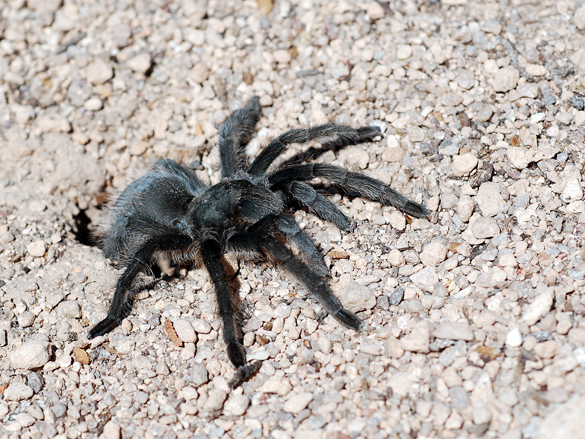