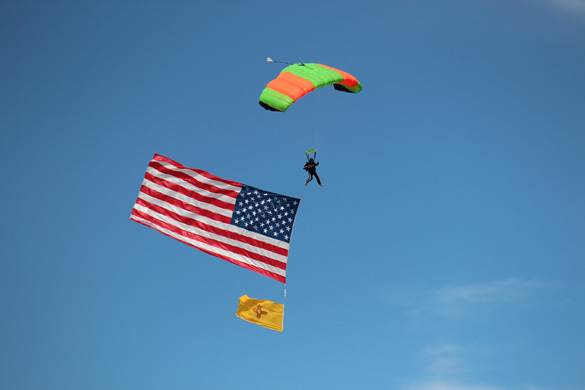 File photo
COMMUNITY News:
Roger Handrahan, who heads the Habañero Ski Diving Team, has had a lot of experience floating down from the clouds—but he says it’s still great fun.
“I started jumping out of airplanes in February of 1968,” he said in a recent telephone interview. He was in the military and served first in Europe. He took “airborne training” prior to going to Vietnam, he said.
Things were different then. People used round parachutes, he recalled, and, “You had very little control.” Today, the parachutes are square, and, “You can go in any direction you want,” he said.
Handrahan, who lives in White Rock, has been a popular entertainer for the Fourth of July Festivities in Los Alamos County for several years. He has four skydivers, three ground crew personnel, a pilot and a public-address system person in his crew.
He and his skydivers fly out of the Los Alamos Airport in a Cessna 182. It takes them 15 to 20 minutes to reach the appropriate altitude and get ready to jump.
Asked what the giant Fourth of July crowd looks like from above, he said, “Go to Google Earth and call up the soccer field. When all the fields are in view, that’s kind of like what we see.” They jump from 5,000 feet above ground level.
Wind can force cancellation of their show. Handrahan, who has to make the dive or no-dive decision, said a 5 mph breeze is perfect, and the wind is okay up to about 10 mph. A little breeze helps with landing, he said. However, if the wind gets much faster, it’s too dangerous to sky dive.
Handrahan himself carries down the American flag. The one he uses is 16 feet tall and 38 feet long, he said, and, “It is NOT an official flag.” It’s what’s called a “flag banner,” specifically designed for sky diving. He wears it in a container strapped onto his harness in front of him. He carries a 6-by-10 foot New Mexico flag underneath it. Sometimes another skydiver carries a prisoner-of-war flag.
When a skydiver lands (stepping fast), the flag lands first and drags. People on the ground are drawn to the landing site like metal fragments to a magnet.
On Monday, July 4, if all goes well, Handrahan plans to have four people jump between 4 p.m. and 4:30 p.m. at Overlook Park in White rock. They won’t be carrying flags (except for a banner promoting Pueblo Electric, a company that he says has done a lot for the team). He plans a second dive at 8 or 8:15 p.m., during which he hopes to carry the American flag, but, he repeated, it always depends on the weather…
Menu
Los Alamos
64°
Fair
5:49am8:25pm MDT
Feels like: 64°F
Wind: 14mph S
Humidity: 47%
Pressure: 30.29"Hg
UV index: 0
TueWedThu
90/66°F
88/63°F
82/61°F
Weather forecast Los Alamos, New Mexico ▸