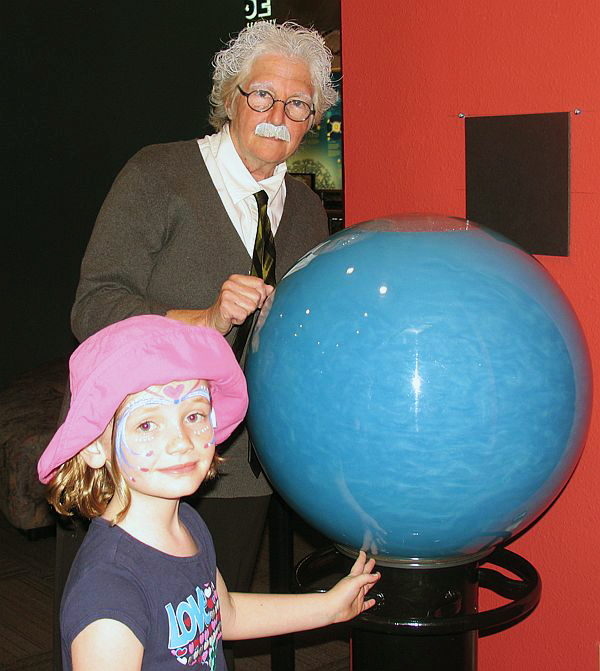 Einstein (Katy Korkos) checks out the exhibits at the Bradbury Science Museum with Alison Kaehn Saturday during the Next Big Idea festival in downtown Los Alamos. Photo by Bonnie J. Gordon/ladailypost.com

Great ideas can burn bright but at the Los Alamos Chamber of Commerce’s Next Big Idea Festival, innovative thoughts were on fire.

The igniting of creativity covered everything from technology and science to the arts and history.

It also touched on education. Kraz-E-Science is a program Dave Scwellenbach runs throughout Northern New Mexico, traveling to elementary, middle and high schools to reveal the strangeness and the wonders of science.

At Scwellenbach’s booth, there was a spicket that seemed to be held by a column of water, a bowling ball that floated on water to demonstrate pressure and chladni plates that showed resonance waves.

Scwellenbach said it is the second time he has taken Kraz-E-Science to the Next Big Idea Festival. He said he enjoys “seeing them (children) get excited about science and various things.”

While science was celebrated, so was technology. John Battles of Mountain Storm Instrument displayed an Intelligence Sensor Platform, which he explained is a specialized data acquisition system designed to reduce the amount of data the sensor sends over a network or “it filters and only sends the interesting stuff.”

Battles said it is his second year participating in the festival. He said he enjoys “meeting people and showing them new technology and explaining it.”

Innovation isn’t just in science or technology; it appears in art, too.

Cosby Lindquist, a local artist, displayed his photographs at the Next Big Idea.

His work is photographic collages, which are created using a photo-stitching process, not unlike the images that are captured by the Rover on Mars.

“My work is about visual perception and how we perceive and remember the landscape,” Lindquist said.

Time, the right light and calm wind are required for his work – in other words, “patience is key,” he said.

The enormous visual dome that was presented by Los Alamos Visual Associates as well as Ethan Bach of bach multimedia, seemed to combine technology, science and art all together.

Bach explained the domes have been used for quite a while.

He explained the dome shape projection screen allows the viewer to be immersed in the content. At the Next Big Idea, viewers were treated to 3D content, Los Alamos images and a film created by Bach’s students at the Institute of American Indians Arts.

Steve Smith of Los Alamos Visualization Associates said he has been participating in the festival for four years.