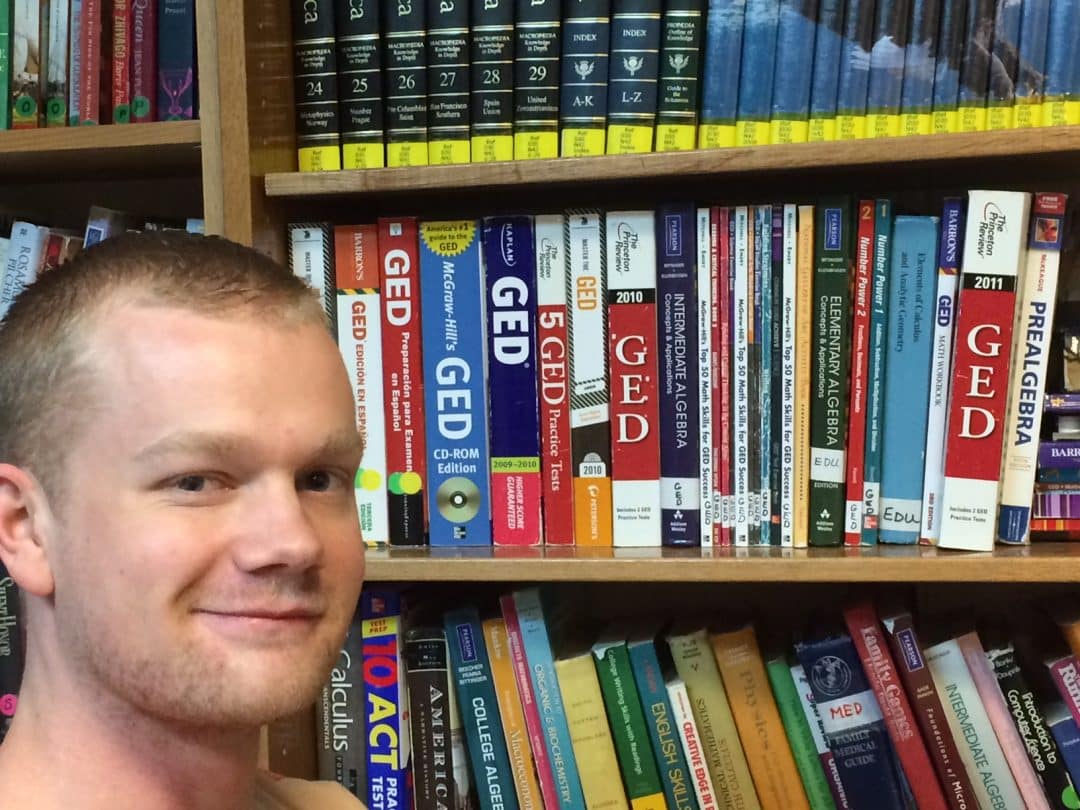 Anthony Lambson shows some of the books he used to study for his High School Equivalency Credential while incarcerated in the Los Alamos Detention Center. Photo by Maire O’Neill/ladailypost.com

Anthony Lambson, 21, just received his High School Equivalency Credential from the University of New Mexico-Los Alamos (UNM-LA). While this would be a cause for celebration for anyone, it is particularly significant for Lambson who will be leaving the Los Alamos Detention Center Thursday after almost 18 months in custody.

Lambson said he is grateful for the opportunity he was given to further his education and make up for the opportunities he passed up and took for granted before ending up in the Detention Center. He said it took the experiences he had following his arrest to change his habits and his attitude.

UNM-LA’s Adult Learning Center has programs designed to improve the educational levels of adults 16 years of age and older. It provides free instructional materials, tutoring and assistance for preparing for the high school equivalency credential. Lambson said he approached Detention Center Administrator Eli Salinas and asked if there was any way he could start the program.

Salinas said he told Lambson as long as he was serious about it, Detention Center staff would help him to get started.

“I told him he was going to have to work,” Salinas said. “Our job is after all to help all people.”

Salinas said it would be impossible for the Detention Center to assist an inmate in preparing the exam if it were not for the volunteers involved. He credited many people for volunteering to help Lambson achieve his goal especially tutors Joachim Schulz and Michael Lane.

Lambson expressed deep gratitude to his tutors, as well as other volunteers who come to the jail regularly such as Bill and Jennifer McKerley and Herb McLean who have offered their support during his incarceration. He also thanked Salinas and Detention Center staff for being attentive and taking a genuine interest in people as well as Chief Dino Sgambellone and Salinas for allowing the adult education program for inmates.

“This jail is unique. If you’re going to be here, you’re going to be sober and you’re going to be safe because the detention officers stay on top of things here,” Lambson said. “There’s a nice library where you can read and learn and begin your education in a peaceful, calm environment. There’s not that threat of violence here, which has been a real blessing for me.”

During his first few months at the Detention Center, Lambson handwrote a 400-page novel. He said he likes to write fiction and essays and considers himself a storyteller. He said he used his novel as a way of reflecting through a made-up story.

When he leaves the Detention Center Thursday, Lambson is headed to the Teen Challenge Program in Arizona for 13 months. He hopes he will be determined to be a valuable asset to the program and hired on to spend additional time there. While acknowledging the hard work he himself put into the program, he thanked everyone involved in his success including family and friends.

“This is the happiest I have ever been, not living a life of guilt,” Lambson said.

Dr. Jane Clements, adult learning program coordinator said she is very pleased that UNM-LA has been able to be a part of Lambson’s success but credited him for his hard work and his volunteer teachers and tutors for being there for him. She said it is very gratifying to see the Detention Center administration and staff go above and beyond in helping inmates such as Lambson.

Gabriel Baca, the program manager said UNM-LA appreciates the great partnership they have with the Los Alamos Police Department. He said sometimes they get a call from Salinas telling them there is an inmate at the Detention Center who would like to be involved in the program and Clements and Salinas work out the logistics to make it happen.

“We are grateful for the support of Chief Sgambellone and our UNM-LA CEO Cindy Rooney,” he said.