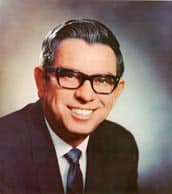 Manuel Lujan, Jr.
STATE News:
New Mexico Senate Minority Leader Stuart Ingle commented Friday on the death of former Secretary and former U.S. Rep. Manuel Lujan, Jr., R-NM.
“It has always been a source of pride for us here in New Mexico that the high and important office of the U.S. Secretary of the Interior was held by a New Mexican under the George H.W. Bush administration,” Ingle said. “As we reflect on the tremendous public service of the late congressman and secretary of the Interior, Manuel Lujan, Jr., I believe we can honor him in a very fine and respectable way by trying to emulate his lifelong dedication to making the Land of Enchantment a better place for all of us. Thank you Manuel.”

A Republican in an era when nearly all the Hispanic Members of Congress were Democrats, he rarely faced stiff competition for re-election, despite the fact that his district leaned Democratic.

Luján made his greatest mark as a member of the House Interior and Insular Affairs Committee, on which he was the Ranking Member from 1981 through 1985. Criticized by environmental groups for being pro-business, Luján sought to balance environmental conservation with development and public use, paving the way for his appointment as Secretary of the Interior after he retired from the House.

While in Congress, Luján focused on regional issues and on the needs of his constituents.

Manuel Luján, Jr., was born May 12, 1928 on a small farm near the Indian pueblo of San Ildefonso, to Manuel Luján, Sr., and Lorenzita Romero. Lujan’s mother was a teacher and served as county clerk in Santa Fe County. Luján, Sr. also was a teacher who later used his visibility as the successful owner of an insurance company to launch a career in politics, serving as mayor of Santa Fe from 1942 to 1948.

Luján, Jr., attended Our Lady of Guadalupe in elementary and junior high school before graduating from St. Michael’s High School in Santa Fe in 1946. He then attended St. Mary’s College in California, earning a B.A. from New Mexico’s College of Santa Fe in 1950. While an undergraduate, Luján married Jean Kay Couchman. The couple had four children.

With his father’s strong roots in New Mexico, Luján, Jr., was well positioned for a career in politics. He bolstered his credentials by serving as vice chairman of the New Mexico Republican Party and built strong community ties by serving on the Bernalillo County Crime Commission and holding leadership roles with the Coronado Kiwanis and the Knights of Columbus.