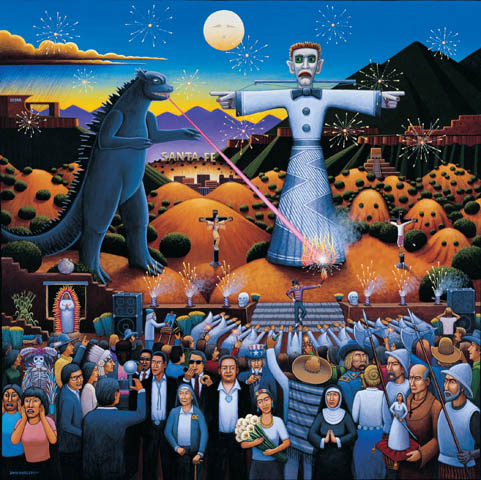 Saturated with a powerful Native voice and evocative visual descriptions of Indian experience, Bradley’s artworks depict historical, social, and political truths, personal narrative, and cultural critique. In Bradley’s narratives of Indian Country, Native people take center stage in world art and history. Through his artwork, he challenges stereotypes about Native American people, places, and events we think we understand, revealing the indigenous experiences at the core of what it means to be American.

As Bradley has said, “I try to use my art to spotlight the Indian worldview and sociopolitical realities. To expose social injustice is to begin to overcome it.”

Indian Country: The Art of David Bradley opens at the Museum of Indian Arts and Culture Feb. 15, 2015 and runs through Jan. 16, 2016. On view will be 32 works of art spanning his career, including paintings, mixed media works, and bronze sculptures.

As a young man, just out of the Peace Corps, Bradley came to the American Southwest to study art at the Institute of American Indian Arts, and received his BA in Fine Arts from The College of Santa Fe in 1980. For more than 30 years he has lived and worked in Santa Fe, and the qualities of light and color in his work shows the influence of the thin and dry high-desert air. While the decorative color, patterned surfaces, and an overall flatness and linearity of his paintings highlights biting content which he tempers with humor and irony, Bradley’s mixed media works are more visceral ventures into the painful history of Native American lives.

Exhibition curator Valerie Verzuh says of the artist, “David Bradley is a painter of keen sensitivity and intelligence with a singular vision and Native American voice. He redirects the gaze of American life by depicting daily lives, thoughts, and histories from an Indian point of view. Through his artwork he confronts his world with paradox, incongruity, irony, and humor.”

Bradley has received numerous awards and fellowships, including recognition as the only artist to win the top awards in both the Fine Art categories of painting and sculpture at the Santa Fe Indian Market. He was also awarded the Southwestern Association of Indian Art Fellowship in 1980 and the Minnesota Chippewa Art Award for Merit in Art in 1979, among several others.

He has exhibited his work throughout the nation, including the Plains Indian Museum in Wyoming, the Heard Museum in Phoenix, Plains Art Museum in Fargo, the New Mexico Museum of Art and the Armory for the Arts in Santa Fe, the Southwest Museum in Los Angeles, the North Dakota Museum of Art in Grand Forks, the Smithsonian Institute in Washington DC, the Minneapolis Institute of Arts, the American Indian Art Invitational in Lima, Peru, and many others. His work is in the permanent collections of various museums throughout the United States, especially in the southwest.

A COMPANION PUBLICATION FROM THE MUSEUM OF NEW MEXICO PRESS

A companion publication to Indian Country: The Art of David Bradley will be a fully illustrated, four-color publication with 77 color images and 135 pages. In addition to a statement by the artist and curator is a forward by Suzan Shown Harjo (Cheyenne and Hodulgee Muscogee), an advocate for American Indian rights, poet, writer, lecturer, curator, and policy advocate, who was named by President Obama on Nov. 10, 2014 as a recipient of the Presidential Medal of Freedom, the United States’ highest civilian honor.

The Museum of Indian Arts and Culture is a division of the New Mexico Department of Cultural Affairs. Museum exhibitions and programs are supported by donors to the Museum of New Mexico Foundation and its Director’s Leadership Fund, Exhibitions Development Fund and Fund for Museum Education.

Located on Museum Hill™, the Museum of Indian Arts and Culture shares beautiful Milner Plaza with the Museum of International Folk Art. Here, Now and Always, a major permanent exhibition at the Museum of Indian Arts and Culture, combines the voices of living Native Americans with ancient and contemporary artifacts and interactive multimedia to tell the complex stories of the Southwest. The Buchsbaum Gallery displays ceramics from the region’s pueblos. Five changing galleries present exhibits on subjects ranging from archaeological excavations to contemporary art. In addition, an outdoor sculpture garden offers rotating exhibits of works by Native American sculptors.