Independent Electoral Redistricting Commission … Down But Not Out 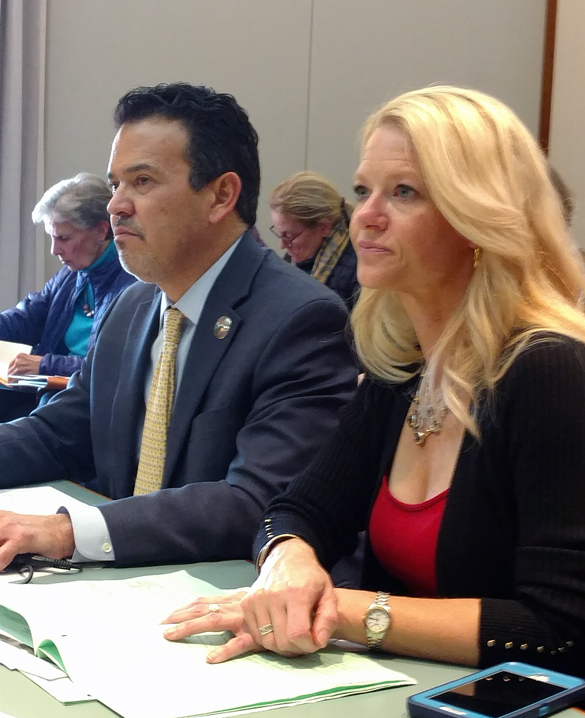 At a hearing Thursday of the House Local Government, Elections, Land Grants and Cultural Affairs Committee, Rep. Carl Trujillo and Heather Ferguson of Common Cause propose a constitutional amendment to reform a beleaguered legislative redistricting process in New Mexico. Photo by Roger Snodgrass/ladailypost.com

SANTA FE — Electoral redistricting has long been a problem in New Mexico. Always a subject of political turmoil, buffeted by individual ambitions and party positioning, redistricting battles also have served as a proxy struggle for regional dominance and ethnic equality.

As if the state’s economic and geographic tensions were not bad enough, New Mexico has lately been pressured by mounting partisan polarization that increasingly results in serial litigation for any marginal advantage.

“No other single issue ignites the interests of legislators, sparks such a variety of alternatives or creates such an intense atmosphere of maneuver and compromise as does redistricting” … so began a special guide to redistricting, prepared by the New Mexico Legislative Council Service for the last round of redistricting in 2011.

Preparations for the 2020 census are already under way. Once again the population figures will trigger Congressional reapportionment, which require changing some district boundaries to reflect changing populations among the states. In New Mexico, electoral districts at the state level for state-wide offices also are redrawn, if necessary, at that time.

The problem comes down to how to decide who is best to decide. And from a skeptical point of view, won’t there always be an invisible political thumb tipping the balance?

The current system in which the legislature takes on the responsibility has not worked out well, according to Rep. Carl Trujillo, D-Santa Fe, introducing a constitutional amendment (HJR 3) proposing an independent redistricting commission to minimize the politics involved in the process.

“We can precisely calculate exactly which precincts are going to be favorable to one party or another and ultimately it lands in court,” said Trujillo Thursday in a presentation to the Government and Elections, Land Grants and Cultural Affairs Committee. “In 2000 it cost about $5.5 million in legal fees, and in 2010 it was $8 million in legal fees that came out of taxpayers’ pockets because the legislators could not agree on drawing the boundaries.”

Under the proposed resolution, the appellate judges nominating commission would select a pool of 20 members, eight Republicans, eight Democrats and four “Declined to State,” that is, individuals who are not affiliated with the two principal parties. The majority and minority party leaders from the House and Senate would each choose one person to be on the redistricting commission, and those four would choose a fifth member, from the list of qualified names provided.

“This is the third year in a row that we have brought this legislation forward,” said Heather Ferguson, legislative director for Common Cause New Mexico, who joined Rep. Trujillo in Thursday’s presentation.

According to the public opinion firm Research and Polling, Inc., 70 percent of New Mexicans support a redistricting commission, Ferguson said. “One of the issues that comes up consistently is that they feel that these are not really challenging races,” she added. “We have many districts that have been drawn in a manner that sometimes has left us with what we call ‘entrenched incumbents.’” Too little competition leads to voter apathy.

A national study conducted by Common Cause lists New Mexico as one of eight states where the composition of the next legislature is largely decided before the vote, because a candidate from only one major party is on the ballot in 62 percent of the legislative districts. There is evidence that the independent redistricting commission model increases the likelihood that there will be contested elections.

Several public interest groups, including the League of Women Voters, America Votes and New Mexicans for Money Out of Politics, joined in endorsing the resolution. Several people expressed concerns that redistricting without more fairness built in was becoming more and more like gerrymandering, a process by which a winner could as easily be determined by how the district was carved out as by how the votes were cast.

Cedric Page, former executive director of UNM-LA, introduced himself as a former geographer at the University of New Mexico. “I support this bill because of the geographic fairness it represents,” he said.

There was no public opposition to the resolution.

Rep. Nate Gentry, R-Albuquerque, the Minority Floor Leader, said he supported the concept on how to choose the commissioners. “We’ve been struggling with how you make sure that someone of a particular party gets to make the appointments, so I think that’s a good approach; and it’s not going to create the ‘rhino-dino’ problem.” The ‘rhino-dino’ problem has to do with trying to recognize a rhinoceros when they can be confused with dinosaurs, or in this case someone who might be a party member, but in name only. This was an ambiguity, Gentry believed, that could disrupt an election, but might well be solved by having party leadership, as in this case, make the party selection.

Committee Chair Miguel Garcia, D-Atrisco and Rep. Debbie Rodella, D-Española, both raised a number of technical and conceptual concerns about the resolution. Both expressed doubts about making it a constitutional matter, suggesting it would be much harder to correct if something about it was not working. Rep.Garcia thought having all 112 members of the legislature with their eyes on the redistricting, as it is handled now, would be better than a group of people who would not have the institutional knowledge and memory. Among her issues, Rodella thought the terms of service for the commissioners needed to be defined. Both representatives sought more explicit guidance about geographic representation.

Given a fairly long list of tweaks and suggestions, Rep. Trujillo was invited to return Tuesday, Feb. 28 with a substitute resolution.

Earlier, HJR 3 received a Do Pass recommendation from the House State Government, Indian and Veteran Affairs Committee. If and when it passes the House Local Government and Elections Committee, the resolution will be referred to the House Judiciary Committee.