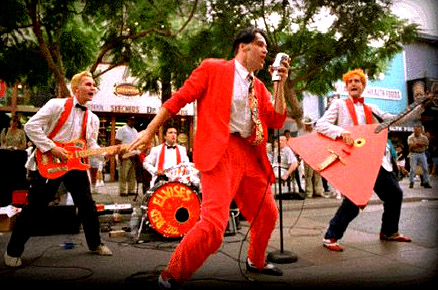 The Summer Concert Series continues with Igor and Red Elvises at 7 p.m., Friday at Ashley Pond Park. The Los Alamos Daily Post is sponsoring the concert.

If Igor and Red Elvises aren’t in the middle of a tour, they are getting ready for the next one – this is a group that is constantly in motion and consistently evolving. Singer, songwriter, guitarist and showman extraordinaire Igor Yuzov is perpetually globetrotting and in the process he has found scores of wildly talented, entertaining musicians to bring into the fold of this increasingly international party band.

Red Elvises started as a Russian group, playing what they dubbed “Siberian Surf Rock”. Since then the band has included musicians from many other countries including United States, Israel, Puerto Rico and Bulgaria, to name just a few. Everyone who performs with them for any length of time brings something different both energetically and musically. At various times shows have included keyboards, accordions, sax, clarinet, trumpet, flute, banjo, mandolin, tuba and many other instruments.

Old and new fans alike can expect to be surprised at shows again and again, however the roots of Red Elvises remain the same: Igor’s unique brand of humor combined with guitar based rock’n’roll that makes audiences want to sing, dance, scream and shout.

German born Igor Yuzov grew up in the former Soviet Union, where folk music was the norm and rock’n’roll was illegal. A rebellious streak, however, led him to seek out the forbidden records, which could be secretely traded in some places for those who knew where to look. As soon as it became possible, Igor left Russia for America with his folk band Limpopo. The “Crazy Russian Folk’n’Roll” group were personally greeted by Ronald Reagan and proceeded to win Ed McMahon’s Star Search.

Red Elvises began in 1995 after Igor dreamed that Elvis Presley came to him and told him to start playing rock’n’roll. Not one to say no to the King, Igor and his Russian friends started playing on Santa Monica’s 3rd Street Promenade. Their street musician days did not last long, however, as they drew such huge crowds that the City of Santa Monica brought them to court and ordered them off the streets.

Since then Red Elvises have been constantly touring, with occasional breaks from the road to record an album or take part in film and television projects. This constant work for the last 15 years has led to them gaining a world-wide following, with successful tours all over North America, Europe and Russia (Red Elvises bootlegs have been found in Siberia).

They can be found playing everything from large festivals to private parties, small venues to massive stages such as 2005’s Live 8 Benefit Concert. Whatever the event, wherever Igor & Red Elvises go, they bring the party with them.

The concert series is FREE to the public by the County of Los Alamos and the businesses, professionals, and neighbors. Here’s a growing list of 2016 sponsors.

The Series is coordinated and managed by Russ Gordon of Gordons’ Concerts of Los Alamos. This series of Friday evening concerts-in-the-park spans the summer from late May into early September and is held at various locations around the county.

Each year thousands of residents and visitors take advantage of the beautiful park venues in Los Alamos, pull up a lawn chair, and enjoy an eclectic variety of talent from rock to blues, jazz, country, Latin, Americana, African and World rhythms and Russian Rokenroll.