Idzorek Is Delegate At Daughters Of The American Revolution National Convention In Washington, D.C. 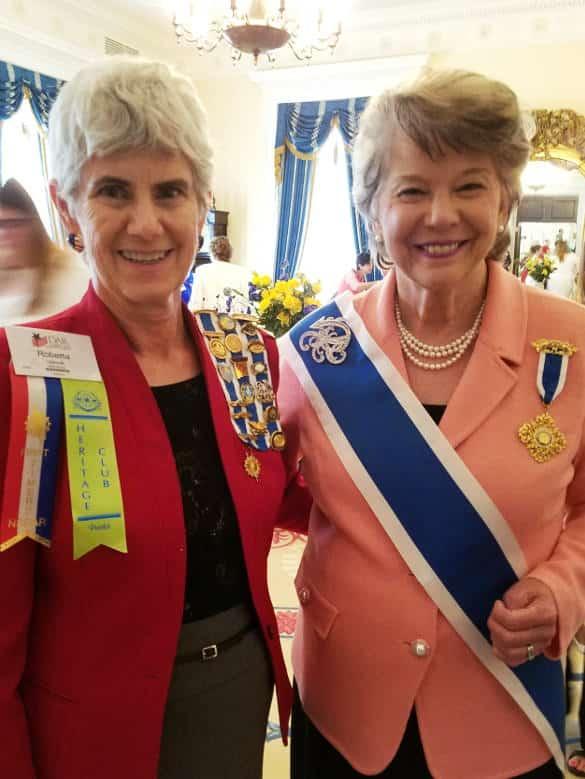 Valle Grande Chapter Regent Roberta Day Idzorek, left, of Los Alamos with National Society Daughters of the American Revolution President General Ann Turner Dillon, in the President General’s Reception Room, NSDAR Headquarters, Washington, D.C. Courtesy photo
DAR News:
WASHINGTON, D.C. ― More than 3,500 members of the Daughters of the American Revolution convened in the nation’s capital in June for the 127th Continental Congress, the latest gathering of the longstanding service organization’s annual meeting.
The week-long convention consists of business sessions, committee meetings, and social functions, and is topped off with formal evening ceremonies at which national DAR award winners are honored. In attendance was Roberta Day Idzorek, Regent of the Valle Grande Chapter, which is based in Los Alamos, NM.
The Opening Night Ceremony featured award winning documentary filmmaker, Lynn Novick, as keynote speaker, who was also be awarded the DAR Media and Entertainment Award. The National Defense Night Ceremony, honoring our nation’s military personnel and veterans, welcomed Rear Admiral Joseph M. Vojvodich, Deputy for Mission Support for the U.S. Coast Guard, as keynote speaker. Other national awards were handed out during the week to outstanding individuals celebrating excellence in historic preservation, education and patriotism.
“As our more than 3,500 dedicated DAR members gather in one place, their energy produces inspiration, creative breakthroughs and true camaraderie,&quot; said Ann T. Dillon, President General. “We are grateful for the opportunity to reflect on the hard work and accomplishments of the past year, including the donation of hundreds of thousands of dollars to preservation, education and patriotic endeavors and the contribution of millions of hours of volunteer service in our communities. The reports presented at Continental Congress offer irrefutable proof that the DAR remains a relevant, vital and multifaceted force in cities and towns across the country.”
The DAR Continental Congress is a time-honored annual gathering that has been held in Washington, D.C. since the organization’s founding. National, state and chapter leaders as well as other members from across the country and around the world meet at the DAR National Headquarters to report on the year’s work, honor outstanding award recipients, plan future initiatives and reconnect with friends.
The National Society Daughters of the American Revolution was founded in 1890 to promote historic preservation, education and patriotism. Its members are descended from the patriots who won American independence during the Revolutionary War. With more than 185,000 members in approximately 3,000 chapters worldwide, DAR is one of the world’s largest and most active service organizations. To learn more about the work of today’s DAR, visit www.DAR.org.
Menu
LOS ALAMOS