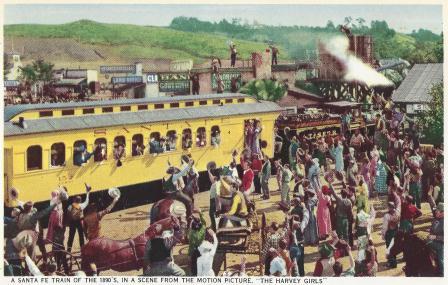 Old postcard depicting the making of the movie, ‘The Harvey Girls.’ Courtesy/MRM

The Millicent Rogers Museum (MRM) in Taos announces the opening of its latest exhibition, “Fred Harvey and the Making of the American West.” This unique exhibition will open to the public Aug. 1 and closes Jan. 31, 2015.

Featuring more than 100 objects drawn from the family of Fred Harvey, various private collections and the Couse Foundation (Taos), the exhibit focuses upon how Fred Harvey and his company created the popular imagery that Americans came to understand as representing the West.

“The impact of the Fred Harvey company and their partnership with the Santa Fe Railroad was truly monumental,” MRM Executive Director Peter Seibert said. “They created a sense of the West that was found in every American household in the mid-20th century, from the toy Super Chief train running beneath a Christmas tree, to the use of the Thunderbird. Today, many of these images still remain recognizable as icons of the West. We are thrilled to be able to work with the Harvey family, private foundations, and collectors to bring this show to the public.”

Born in England, Harvey (1835-1901) came to the United States and built a successful company that provided meal and lodging service for travelers heading west on the Atchison, Topeka and Santa Fe Railroad. The company, bearing his name, continued long after his death and was synonymous with the travel and tourism industry in the American West.

The exhibition, the largest mounted in recent years at the Millicent Rogers Museum, brings together a wide range of objects owned by the Harvey family as well as items that were retailed and/or used to promote or market the company.

A special focus of the exhibit looks at the relationship between Native American artists and the Harvey company. This included potters such as Maria Martinez (San Ildefonso Pueblo) and Nampeyo (Hopi) who found work showing and selling their pottery at Harvey establishments. Author Dennis June, whose recent book Fred Harvey Jewelry: 1900-1955 (published by Schiffer Publishing), will be guest curating a section of the exhibition focusing upon Native American jewelry made for and retailed in the Harvey company stores.

Another central theme in the exhibit is the close relationship between the Fred Harvey company and the Atchison, Topeka and Santa Fe (ATSF) Railroad. Through their close business ties, the two firms created a tourism destination in the West that was accessible for the first time to many Americans. The famed Super Chief, grandest of all trains, was perhaps the most successful aspect of this partnership. With its deluxe club and dining car service, elevated viewing cars and first class service, it is considered by many to be the ultimate in 20th century railroading. Everyone from Ronald Reagan, to Charlie McCarthy and Edgar Bergen, road the Super Chief.

For the young, and the young at heart, there will be a working O-scale electric toy train of the fabled Super Chief. This electric train, believed to be the most popular toy train produced by the Lionel Corporation, was the ultimate Christmas dream for many children in the 1950s and 1960s.

Visitors will be able to view a large collection of railroad promotional calendars taken from the original paintings by E.I. Couse of Taos. This collection, along with several of Couse’s props used in the paintings, will be on loan to the exhibit from The Couse Foundation (Taos). These calendars brought the American West into many homes and inspired generations of tourists, writers and authors to experience the region.

A special Fred Harvey luncheon with food inspired by the Fred Harvey cookbook will be held Sept. 6. Dennis June, author and guest curator of the jewelry portion of the exhibit, will be the guest speaker.

For more information on the show or luncheon, contact the museum at 575.758.2462 or visit www.millicentrogers.org.