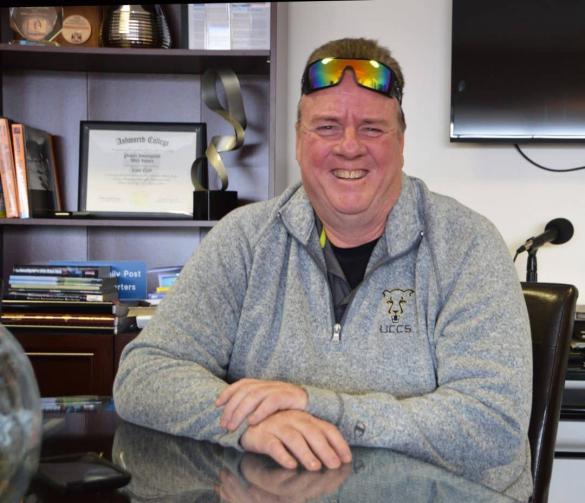 Hugh Rich stopped by the Los Alamos Daily Post Wednesday to announce that he is running for Los Alamos County Sheriff.

Rich, a registered Republican, works at Los Alamos National Laboratory. He has worked in computer security at LANL for eight years and recently moved to the Chief Information Office. He has more than 20 years of experience in system administration and computer security.

Rich served as a police officer for the Los Alamos Police Department in the early 1980s.

He left to go to school where he earned degrees in electrical engineering and criminal justice.

Rich said he decided to run for sheriff because, “Truthfully I’m tired … the sheriff issue has become a battle … I think there’s fault on both sides and no one is willing to give in … there’s no communication and communication is a big thing. I don’t see it on either side and I don’t see it in some of the candidates I’ve talked to either.”

He added, “I am willing to listen to both sides … lawsuits and threats and aggressiveness just don’t cut it … there are ways to solve this … nobody wins when there is a lawsuit.”

What will solve the conflicts, Rich said, is calmness and level headedness. He added he feels the community is divided. “Enough … let’s solve this,” he said.

Rich said he will not seek to expand the duties of the sheriff’s office.

“The police department has the equipment, training and personnel to do that. I don’t think we need to expand that … we don’t need a $100,000 a year undersheriff and cars … it’s a duplication and against the charter,” he said.

If elected, Rich said he will continue working at the lab. He has the blessing of his bosses, he said.

Rich said it is time to start fresh and end the controversy surrounding the sheriff office and its role in the community. He added with his background as a police officer, “I know the split … I used to be a cop but I’m not carrying any certifications now. I’m ready to work with current and new County Council, the police and the community. The council that voted on this is gone and the sheriff  is going to be gone … God gave us two ears and one mouth. I talked to some of the people running for council and it’s clear no one is willing to step back. We’re a unique community started by a land grab. If people want to change the charter, okay, but lawsuits won’t fix it. We need to sop, listen and take a breath.”

Rich lives in White Rock and has two grown children who live in Colorado. He said he moved but returned once he completed school, because Los Alamos is a great place to raise children.

His family includes three generations of Los Alamos High School graduates. His mother Sylvia Pritchard graduated in 1961. Rich graduated in 1980, his daughter Samantha in 2007 and his son William in 2014.