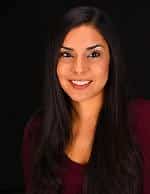 Rosario Vasquez
NMHU News:
LAS VEGAS, NM ― A Highlands University computer science master’s degree candidate has landed a career position at Los Alamos National Laboratory.
Rosario Vasquez, who also earned her bachelor’s degree in computer science at Highlands, will work at LANL in a position that focuses on computer support and system administration.
“My position at LANL will allow me to work on innovative projects as well as put to the test my problem-solving skills when administering technical issues,” said Vasquez, who has worked at LANL as an intern for the last year. “It’s an exciting professional opportunity I never thought I would have.”
Vasquez, who has earned a 4.0 GPA to date, will compete her master’s degree in July.
Vasquez said the research experience she gained at Highlands with computer science professor Gil Gallegos in his Computational Science Laboratory was invaluable in preparing her for her LANL position.
“The research opportunities I had at Highlands working with Dr. Gallegos on the PREM grant strengthened my ability to take on cutting-edge research projects with real-world applications from plasmonics, the interaction of light and matter at the nanoscale level smaller than light waves, to machine learning, which is finding important patterns in data,” Vasquez said.
PREM stands for Partnerships for Research and Materials Science, a $3.3-million National Science Foundation grant Highlands chemistry professor Tatiana Timofeeva secured. Gallegos is one of the Highlands researchers for the grant.
“Rosie is a top-of-the line researcher who has incredible perseverance, a great aptitude for mathematics, is highly intelligent, and loves to learn,” Gallegos said. “She’s a valued member of my research team, setting the bar high for herself and fellow students. She’s a respected colleague and will do very well at LANL. It’s exciting to imagine the bright future Rosie has ahead of her.”
Gallegos is also Vasquez’ adviser and chairs her thesis committee.
“My thesis research focuses on machine learning applications using a technique called autoencoding to extract salient and important characteristics from a complex data set,” Vasquez said. “I’m using image recognition to distinguish numeric characters based upon the encoded data. I’m building a model that ultimately has the potential to be applied to various complex data such as health care patient data that predicts cancer or Alzheimer’s.”
Vasquez said Gallegos made her believe in her ability to complete innovative research projects and then present the results at national conferences.
She also honed her computer science knowledge in classes Gallegos taught such as Artificial Neural Networks and Machine Architecture and Assembly Language.
Outside the classroom, Vasquez was a math tutor in the university’s Achieving in Research, Math and Science Center, or ARMAS, assisting students with coursework form algebra to advanced calculus.
Vasquez, a 25-year-old from Coachella, Calif., is the youngest of seven children and the first in her family to attend college. She also is a first-generation Mexican-American.
“I’m proud to be a Latina who is succeeding in a predominantly male field. I hope to encourage more women to seek careers where we lack presence. I also hope I will inspire more of my family to pursue college,” Vasquez said.
Menu
Los Alamos
41°
Fair
7:09am5:26pm MST
Feels like: 36°F
Wind: 10mph S
Humidity: 25%
Pressure: 29.92"Hg
UV index: 0
WedThuFri
34/18°F
34/16°F
37/21°F
Weather forecast Los Alamos, New Mexico ▸