The Garden at El Zaguán in Santa Fe. Courtesy photo 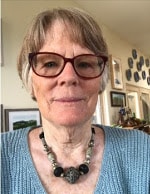 Susan Williams
HSFF News:
Historic Santa Fe Foundation presents the July Salon El Zaguán monthly lecture series with Susan Williams on Santa Fe’s Colonial Revival: The Garden at El Zaguán.
The talk is scheduled for 3 p.m., Thursday, July 11, 2019, in the sala of HSFF’s El Zaguán located at 545 Canyon Road, Suite 2, Santa Fe.
THIS IS AN ENCORE PRESENTATION of the lecture that was given at the Santa Fe Botanical Gardens in 2018.
The reserved spots will fill up fast. No refunds for non-member tickets/reservations, but tickets can be transferred with buyer’s name on file at HSFF. There is no charge for admission for members and the non-members entry fee is $10. To RSVP FOR MEMBERS AND NON-MEMBERS, visit the Salon page on HSFF’s website.
About the lecture
This lecture focuses on El Zaguán’s lovely garden as a cultural artifact, part of a larger national movement to celebrate the past through historical styles, furnishings, costumes, and traditions. As a historian of American material culture and the Colonial Revival movement, I wondered about what kinds of cultural values might be embedded in this garden, and how they changed over time. How did Santa Fe’s “city different” agenda, with its emphasis on the romantic and picturesque, compare with the goals of the Colonial Revivalists nationwide?
I’m also wondering how this garden fits into the larger context of women’s work in America? Gardens historically have been created, tended, and preserved by women, in part as a social strategy to pass traditional values on to their children and make the world a better place. Who were the women who defined El Zaguán?
Finally, can El Zaguán be considered a colonial revival garden? In its form, plant materials, and historical references, the garden at El Zaguán shares many attributes of the Colonial Revival, as defined in the work of historian Alice Morse Earle. Earle’s influential book, Old Time Gardens, published in 1901, laid out many of the characteristics of the classic “old fashioned” garden. To what extent does the El Zaguán garden reflect Earle’s preachings? And what explains this garden’s remarkable persistence? The story of the El Zaguán garden is the story of Santa Fe, of using “ancient vernacular” to ensure the continuity of traditional community values, family and gender roles, and an aesthetic that perpetuated those values.
About the speaker
Susan Williams is a native of Rochester, New York. She moved to Santa Fe in 2015, after twenty-seven years in southern New Hampshire. She worked for fifteen years at the Strong Museum in Rochester as Curator of Household Furnishings, specializing in European and American glass, ceramics, and silver. In 1992, she received a PhD. in the History of American Civilization from the University of Delaware, where she was a McNeil Fellow. She spend the final phase of her career at Fitchburg State University in Massachusetts, from which she is now an Emerita Professor of History. Since moving to Santa Fe, she has become a docent at the Santa Fe Botanical Garden and she is an active member of the Eldorado Community Garden. She has written three books:Savory Suppers and Fashionable Feasts: Dining in Victorian America (1985), Food in the United States, 1820-1890s (2006), and Alice Morse Earle and the Domestic History of Early America(2013). As a scholar of American material culture and food history, she has lectured widely all over the United States. Retirement has enabled her to pursue her other two passions—watercolor painting and photography. She recently participated in the Eldorado Studio Tour.
To RSVP FOR MEMBERS AND NON-MEMBERS, visit the Salon page on HSFF’s website.
PRESS CONTACT:  Melanie McWhorter, melanie@historicsantafe.org or 505.983.2567.
Menu
Los Alamos
88°
Sunny
5:48am8:23pm MDT
Feels like: 88°F
Wind: 5mph NE
Humidity: 11%
Pressure: 29.86"Hg
UV index: 10
TueWedThu
90/64°F
91/64°F
88/64°F
Weather forecast Los Alamos, New Mexico ▸