Mr. Fluff was a self-assured scrub jay. He came every morning with other scrub jays to take unsalted peanuts from the front porch railing and hid them in the garden. He earned his name one day when he arrived a little later than usual and saw us eating breakfast in the kitchen. The Steller’s jays had already hid the morning’s eight peanuts. 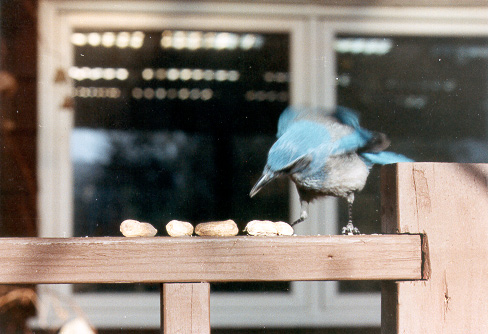 A scrub jay takes peanuts from the railing. Courtesy/Cary Neeper

Sitting on the end post of the porch railing with his eye clearly focused on us through the window, the Scrub Jay extended his feathers and shook, like a hatchling begging for food. He had turned into a ball of blue and gray fluff we couldn’t resist. We raced for the peanut can so he would know we got the message. He watched as we placed six more peanuts on the railing, then swooped in and hid all six in the yard. The performance was repeated every morning, so we called him Mr. Fluff.

The next day, when all 18 peanuts had been hidden, and he came to fluff a fourth time, we decided to set the limit. While he was watching us through the window, I spread out my arms wide and flat and shook my head. “That’s all.” He fluffed and I spread arms again. Again he fluffed, I spread arms, and at last he got the message and flew off.

He tried again and again to get that fourth dose of peanuts, but we held firm, and before winter was over Mr. Fluff was flying away at the spread arm signal.

As usual the jays disappeared for a while in spring and summer, and we waited eagerly for Mr. Fluff’s return. He did. For three or four years he fluffed for us and received his peanuts, three loads each morning.

Then, after the fire of 2010 when we had to evacuate for a week, he disappeared from our lives. Other jays come now. Some are young and skittish. None will eat out of our hand, but one scrub did fluff once, from up in the aspen tree. I’m hoping he or she will learn to trust us enough to come down for peanuts when our backs are not turned.