How The Hen House Turns: Walking Sadie Sue On The San Andreas Fault 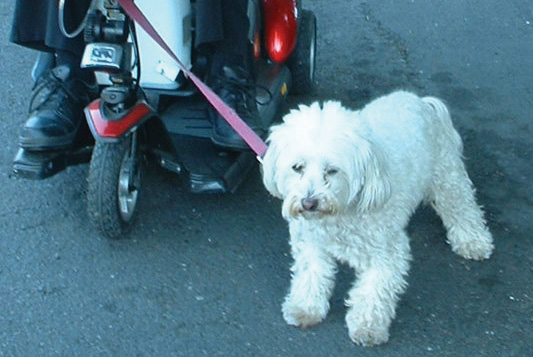 Sadie Sue takes a walk with her owner. Courtesy photo

My friend Sadie Sue lives in our retirement center, built (apparently with blind faith) between two forks of the infamous San Andreas Fault in California. In the nearby Open Space Reserve, a hiking trail parallels the fault, which is a lovely ravine filled with huge, unsuspecting liveoak trees, a large duck pond, and colorful poison oak.

Sadie Sue is a Cuban Havanese dog. Her white wavy hair lies neatly all over a trim ten-pound body. She gets lots of exercise while running a quick pace to keep up with her mistress’s electric cart. Recently I’ve had the fun of taking her on her morning walk. It’s a challenge. I can’t run as fast as she can.

Since she doesn’t get much chance to sniff out fascinating aromas while running with the electric cart,

I follow her lead during our morning walk. Our progress is slow, then very fast, here and there as we climb the fault trail up Reservoir Hill. Every twig of dry grass is of great interest. I don’t let her sniff poison oak.

Prickly oak leaves sometimes stick in her paws, and she is adept at pulling them off. But if Sadie sue can’t get a tiny pebble out of her paw, she hands it to me and waits patiently while I probe with my fingers. She also cooperates when I dry her paws before entering the apartment.

During the first mile, she has usually done her business. Then, if her mistress is not feeling well, she heads straight for home, faster than I can run.

If it’s dark, she will insist on exploring the 40-acre campus, stopping to check out each door where dogs reside. The right angle orientation of the buildings does not confuse her. She knows the campus very well.

If I object to her choice, which might be running down the apartment hallways, she will pull on the leash in the chosen direction, while I pull on my chosen direction. After nearly 60 seconds of this frozen stance, her insisting eyes focus on mine. If I shake my head no,  she gives up in and leads me off in the direction I have insisted we take. Mutual respect pays off.

Along the way, if we encounter a runner with a large dog, she insists on barking. Otherwise, she is silent, even when I pick her up and whisper, “Its a deer,” or “It’s just a few turkeys.” She gets it. Her sensitivity to human turn of mind and health is extraordinary.

Normally Sadie Sue sleeps in her crate throughout the night. Recently, in the middle of the night, she woke her mistress with insistent whining. My friend got up to check the dog’s water. She asked Sadie if she needed to go out. A sullen refusal. She looked the dog over. Nothing seemed to be wrong, but the whining continued.

Puzzled, Sadie’s mistress went back to bed. There she realized that her oxygen supply had quit. It was silent. When she turned on the noisy oxygen again, Sadie quit whining and returned to her bed. The dog realized that the machine’s silence was not good. She had saved her sleeping lady’s life.