How The Hen House Turns—The Power Of Awareness 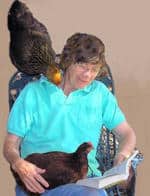 By CARY NEEPER
Formerly of Los Alamos
As I look back on our forty-six years in Los Alamos, I am especially grateful for the opportunity our children had there—to raise animals. Their love for “others” still impacts all their lives.
We are thankful—not only to the county for its understanding of the lessons learned from knowing animals, but to the tolerant neighbors who understood the occasional barking and crowing during the occasional early hour.
One asked us please to have another rooster because she loved the sound of morning crowing. For many years we had kept our gamecock Peeper shut in the Hen House until eight a.m., but occasionally…
Actually, we rarely forgot to close the Hen House at night, for that could be a deadly mistake. One year a raccoon broke down a small sliding door, unattached it another time, and finally broke it open. I could never understand why racoons killed chickens but never ate them.
The point is that living with an animal gives us an appreciation to understand what we are as humans and why others are the same in some ways and different in other ways. Now that the academic study of animal behavior has expanded to include their interactions in natural environments, we understand better and are often amazed at how some have adapted to human demands.
Studies in recent years have found that wild horses live in bands of 3 to 10 individuals, that they interact in complex ways between bands, and that they are never, ever, alone.
Recent books of octopuses reveal that it was not until the year 2000 that aquariums recognized them as curious and intelligent beings—not just clever at escape, but curious and responsive, welcoming friendly human attention.
I was amazed yesterday, when our neighborhood squirrel stopped running along the edge of the roof at the sound of my soft greeting. For a minute or two, he listened to my admiration of his large belly full of acorns and my invitation to come get a peanut. He didn’t understand the directions, but he looked me directly in the eye, trying to puzzle it out, obviously tuned into my friendly recognition of his personage. I’ll try again another day.
A recent article in Science News (Dec.1, 2017/Jan.6, 2018) noted that the cloned sheep Dolly was quite normal for her age. Life is life, after all, precious, no matter the source.
In addition to the recent long-term studies of wild animals, Temple Grandin’s work with domestic animals and her brilliant writings and lectures have made a major impact on how we humans can identify with animal behavior and understand their mindset.
By sharing her experiences with the livestock industry, Grandin has awakened us to how much we share with other life, where we have been blind-sided, and what we must do to re-examine our assumptions about animal intelligence so that we can find ways for protecting and honoring the lives of others.
Menu
Los Alamos
54°
Fair
7:15am6:25pm MDT
Feels like: 52°F
Wind: 7mph SW
Humidity: 37%
Pressure: 30.22"Hg
UV index: 0
MonTueWed
64/43°F
59/36°F
61/39°F
Weather forecast Los Alamos, New Mexico ▸