How The Hen House Turns: Rattlesnake Behavior And A Few Brief Reviews

How The Hen House Turns
By Carolyn A. (Cary) Neeper, Ph. D.
Rattlesnake Behavior And A Few Brief Reviews

At the end of Streak’s story last week, I promised a rattlesnake story.

Then I received a comment from Joy Drake for my blog at caryneeper.com, and I decided the theme today would digress to include a note about recent research that addresses the issue she mentioned – “ascribing human emotions” to animals. 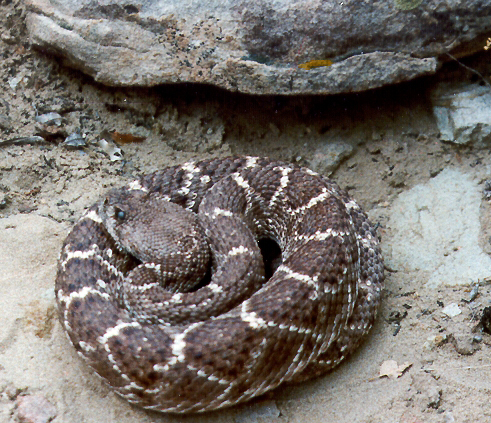 Are we imagining things when a dog smiles? Or wags its tail, or jumps around excitedly when we get out the leashes? Or when Lucy goose says “Speuw” with a shake of her bill, refusing cabbage? (She doesn’t do that when offered cauliflower leaves, and all the birds of the Hen House compete for iceberg lettuce.)

PBS-NM recently aired a Nature program called “Animal Odd Couples.” Here’s a quote from the DVD cover: “…cross-species relationships are now being documented in increasing numbers … scientists have begun to reconsider (italics mine) what was once conventional wisdom–that humans are the only animals capable of emotions and friendship …”

PBS books recommended include Kate and Pippin by Martin Springett, New York: Henry Holt and Co., 2012 for children and The Emotional Live of Animals by Marc Bekoff, Novato,CA:New World Library, 2007, an academic analysis with a few anecdotes.

The early work of Frans de Waal, Good Natured: The Origin of Right and Wrong in Humans and Other Animals, Cambridge, MA: Harvard University Press, 1996, broke the stigma against ascribing emotions to animals, and Temple Grandin’s book Animals In Translation, New York: Scribner, 2005, provided definitive, useful evidence of how animals’ brains worked WISIWIG assumptions. The list of publications on the topic of animal emotion continues to grow.

It happened one day at the Seismosaurus Site – the excavation in the Morrison Formation north of Albuquerque that unearthed the longest Sauropod ever found, until it was scooped by Argentinosaurus. I was involved in recording some lab personnel’s volunteer studies of bone and the possibilities of viewing it remotely underground. It would have been nice to know where to dig in that hard sandstone.

Occasionally a generator was used to run a hand drill. The generator was about three feet high and 18 inches in diameter. It was nice and warm. In mid-winter it attracted a rattlesnake, who would show up when he heard the machine and wrap himself around its base to soak up some radiant heat.

Humans came and went, but two were there nearly every day—the excavators Wilson and Peggy Bechtel. They ignored the snake, and he returned the favor.

When we appeared on the scene, we also ignored the snake, sort of – being careful to watch it when it slid to the nearby hillside to soak up some sun. One day it looped itself into a lovely coil I couldn’t resist.

I got out my camera and approached the snake, slowly, showing him my harmless black box. No problem, so I moved in a little closer to get a good portrait. When the aimed camera closed in at three feet, the snake’s rattle appeared. It shook gently, sounding a quiet “r-a-t-t-l-e … r-a-t-t-l-e” – a sound that could only be interpreted as, “No closer, please, lady.”

Politely, I backed off. The picture was not as good, so I moved into the three-foot range again. Once more came the warning: “R-a-t-t-l-e … r-a-t-t-l-e.”

“Okay, says I,” and I backed off and took the picture, then sat down to watch the dig continue.

As the sun sank lower into the desert of mesas and colored clay valleys, the rattlesnake unwound himself and headed for his cave on the side of the mesa.

At a safe distance, I paced him out at about nine feet. A polite fellow, when given space. Not so polite later that month when a scientist’s dog cornered him under a bush.

Editor’s note: Dr. Neeper is an avid student of sustainability, steady‐state economics and the impact of cosmology on issues of science and religion. She and her husband Don Neeper live in Los Alamos with a friendly menagerie of dogs, fish and fowl. CaryNeeper.com/blog.htm