How The Hen House Turns: Dogs At Christmas Time 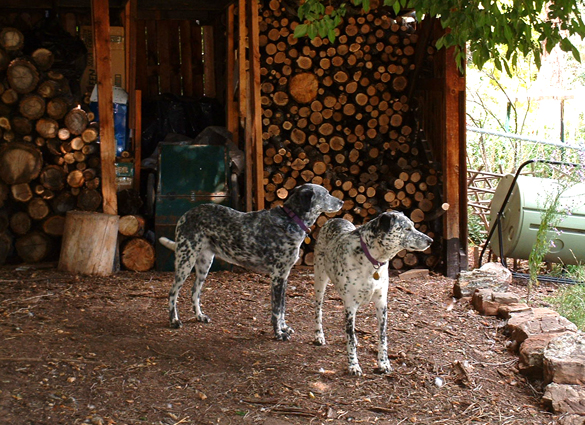 DeeDee and Scooter in a woodshed in Los Alamos. Courtesy photo

In our family, Christmas included dogs. It started when my brother and I were told to “pull gently” on a long string the Christmas morning when I had just turned three years old. In waddled a black and gold ball of fluff paddling along on four stubby white legs. We called her Boots.

Every Christmas, until I was a junior in high school, she enjoyed the package opening, curious to see what the wrapping hid, and delighted when it was obviously something for her. She shared with us the fun and feasting with all the cousins, anticipating the bite of turkey coming her way—usually the liver and neck (after I finished with it).

That tradition continued with our Los Alamos dogs. Poncho joined us from the Santa Fe shelter at age 6 months and quickly learned to wait his turn at a package. Later in our lives, DeeDee and Scooter, after a few years experience, paid close attention when the Christmas tree went up.

Every day they would check to see if the packages had appeared. When they did, the dogs took great care not to disturb them as they sniffed each one. Of course, they identified only the dog goodies that were not sealed in plastic. Somehow, they knew they had to wait for the package-opening morning, when everyone sat around eating gooey rolls and oranges.

I can’t remember when I began to wonder what my animal friends were thinking. As a child—growing up with Boots, a mixed “shepherd,” I assumed she knew who she was and what she wanted to do with herself. I took her sniffing for granted, without questioning why she did it so much.

Only in my later years with DeeDee and Scooter in Los Alamos, did I notice the dogs’ intense interest in smelling particular twigs and rocks. Why did they care who had been where? They seemed to be seeing a world painted by odors.

The PBS show “Super Senses” suggests that dogs know when its time for their owner to return home, because they can smell the precise decrease in that person’s scent around the house. Perhaps. It seems extreme, until we remember that the dogs’ capacity to smell saves lives—not only by locating disaster victims—but by anticipating epileptic seizures and diabetic problems before they occur.

It’s not just their genius for smelling. They are so attuned to us humans that they will follow a finger pointing to a cup supposedly hiding food. They will go to that cup once shown the food there, even though the treat has been moved to a second cup.

They are also stubbornly loyal to those “masters” who rely on them for constant companionship. Here in California, I have seen a quiet dog object strongly with barking and straining at the leash when his human was momentarily taken off alone for personal nursing care. It took some reassurance and training for him to let go of his responsibility. He was constantly on alert until his patient returned to his care.

What a gift—this loyalty and devotion, this ability to adapt to human demands and idiosyncrasies, to join in family traditions that require patience, and to understand their important job when given one. Our Hen House birds depended on DeeDee and Scooter’s vigilance to keep them safe from the coyotes that lived in the canyon. That was their job, and they knew it, even to the end, when their arthritis made it difficult for them to stay outside very long.