How the Hen House Turns: Bobbi the Baby Goose and Hawks

How the Hen House Turns: Bobbi the Baby Goose and Hawks
Column by Carolyn A. (Cary) Neeper, Ph. D.

It’s been five years now. Lucy the goose decided to sit on eggs, again, in the wrong place ─ the Khaki Campbells’ nest box. I hated to move the ducks. They were new to the Hen House, and Ms. Khaki was laying gorgeous green eggs for the allergic kid down the block. Fortunately, they didn’t object to sleeping in the Hen House for four weeks.

End of that story─ Lucy wouldn’t move. She sat in the nest box for four solid weeks. All I could manage was to get her up for no more than two minutes to eliminate, grab a few bites and a quick drink. I shooed her out with lengthy explanations that she had to preserve her health, that I would give her a real baby goose this time (not baby ducks that grew up to be irritating male runners as I had before. That time I couldn’t move her nest out of the Hen House food closet.

On the 28th day, late in the evening when Lucy would probably be asleep, I removed from under her soft down under-feathers the eggs she had laid, the four I had left for her to sit on. DeeDee and Scooter would enjoy them for breakfast the next morning. (No, they were not fertile. I know better than to try and add a gander to the Hen House.)

As I slipped the eggs out I slipped the baby goose under her feathers. The feed store had baby Chinese geese, and I had purchased one and cuddled it the previous day, hoping it would bond to my human odeur and gentle cooing. When Lucy felt the little yellow fur ball wiggle, she stirred and smiled. Quickly I shut the access door to the nest box. 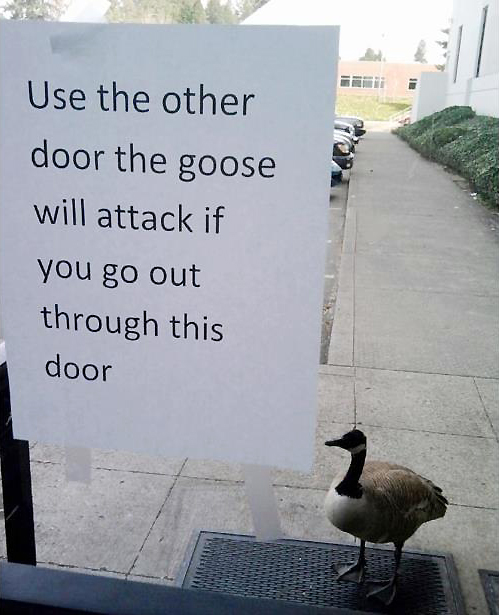 The next morning I could hardly wait to see if Lucy had accepted her fuzzy adoptee. The picture you see with this story tells the tale ─ instant bonding. So what about the frightening mention of hawks in the title of this blog?

To make a long story short, I killed two birds with one stone, if you’ll pardon the expression, and for six weeks, until Bobbi grew larger than the local chicken hawks, I accompanied Lucy and her baby around the yard on their outings into that larger world outside the pen.

While protecting the youngster from the hawks, I also bonded with her, while she managed to convince me that she was a he. Later I learned something about dominance behavior between females. Maybe that’s why she still honks at me when I’m in the pen. I wouldn’t let her sit on me.