How the Hen House Turns: Birds in the Sun 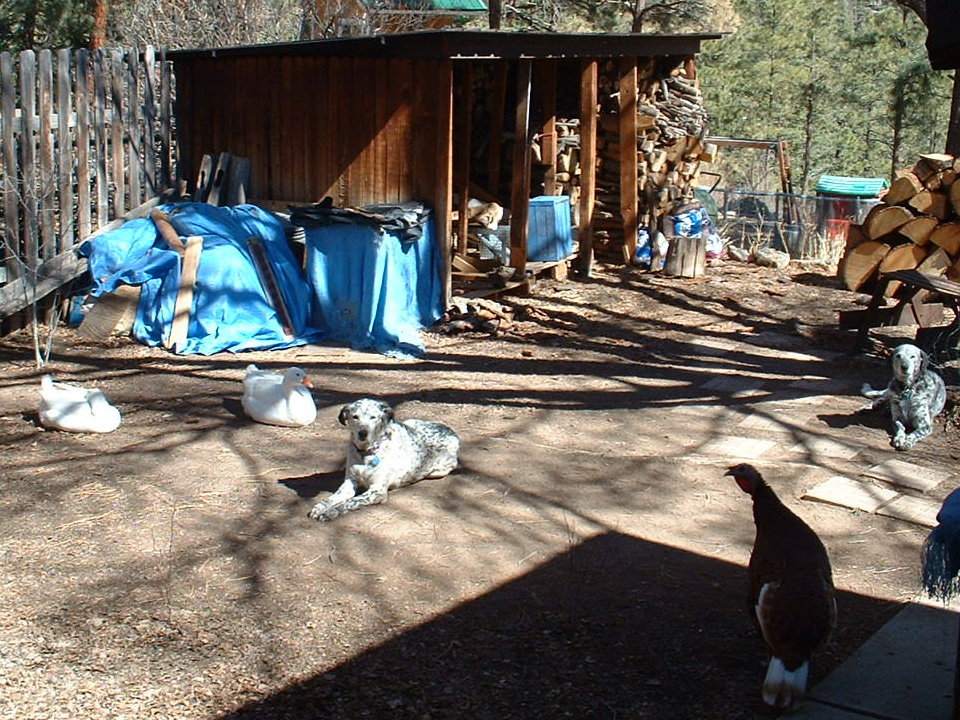 Dogs, geese and turkey enjoy the sun near the woodpile at Cary Neeper’s house. Courtesy photo
How the Hen House Turns: Birds in the Sun
Column by Carolyn A. (Cary) Neeper, Ph. D.

It’s been beautiful lately here in New Mexico. The skies are their usual deep blue, and the sun is warm. Lucy, Bobbi and the gang hang out with the dogs near the south fence by the back porch, where the sun rides over them all day—evidence for a certain survival instinct, an ancient wisdom emerging in the birds.

Chickens are very hard to defend against chicken hawks. Cooper Hawks is the actual name and their eyes are bigger than their stomachs. The whole hawk isn’t much bigger than a chicken, but chickens are delicious, so hawks kill them anyway, especially when the chickens are enjoying their half-acre of free range, open to the sky.

When a chicken is outside in the open, the hawk will haul them to the fence and pluck them clean, leaving the pile of down for you to find. (Like Butterscotch’s fine winter under-feathers, not quite like Lucy’s down.) If the chicken is too heavy, like poor old Toffee, the hawks pluck a few feathers, but leave her in the stock tank, too late for the dogs to save. There’s nothing DeeDee and Scooter, the most loyal of guard dogs, can do in time to stop such a sudden attack from the sky.

Yesterday Lucy goose and adopted daughter Bobbi were asleep in the sun near the back porch when I came out to give the birds their afternoon treat of honeydew melon rinds. I’m afraid  I rudely interrupted their nap, but they followed the treat bucket down to the pen anyway. Khaki and daughter duck Puddles led the way, followed by Little Bear the turkey and the hen, Gwendolyn.

It works you see, the white bucket full of goodies from the kitchen. It often includes the ducks’ favorite, marginally healthy iceberg lettuce, and turkey’s favorite, old bread. I highly recommend it as an easy way to get domestic birds back into the pen before dusk, or whenever you choose.

I thought Butterscotch was safe, hidden under the bushes in the rain storm. I thought Toffee would be okay in the yard, even though it was windy. The only thing I can suggest is that you leave your chickens in a large chicken-wire-covered pen with an apple tree for shade, especially on stormy days, especially when chicken hawks nest in the neighborhood.

What else can one do? The domestic birds love being out in the yard, and the dogs are getting old. I’m thankful for sun and ancient wisdom.