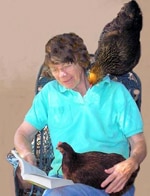 By CARY NEEPER
Formerly of Los Alamos
It was Christmas 1940, I think, when Ma and Pa handed to my brother and me a small rope. They told us to follow it to the living room. Before we got that far, a wiggly ball of brown, white, and blond fur came rolling toward us, teased the rope from our hands, and cleaned our faces with tiny licks.
We named her Boots, for her white hind feet and front paws. That was the beginning of my life with animals. It was also the beginning of my understanding of the importance of friendship. Every morning on my way to Fairview School, I trudged up the hill to the Arnold’s chicken farm. There I waited for my friend to have her hair braided. Together, we would brave taking the shortcut across the bull’s meadow.
On one scary venture into the Pa’s twenty acres next to the turkey farm, I realized that a big brown dog had joined Boots and me. We soon realized that Boots was often with Brownie when they roamed the fields of apricot  trees that stretched from the farm house all the way to D street.
Brownie accepted us as part of Boots’ pack, befriended our dad as he pruned apricot trees, and never came into the house, though he clearly felt welcome as Boots’ best friend. We assumed that old man Madeiros across the dirt road fed Brownie. Only Oscar the cat made the conditions of friendship quite clear. A swipe of open claws said it all to Brownie. Thereafter, peace reined, for Boots and Oscar had become close friends–hunting gophers and moles together.
If Oscar missed the first pounce at the gopher hole, Boots would quickly dig out the victim, and they would share the meal. Their moles ended up on Ma’s back porch. Oscar refused to come inside, until the night he decided to come into the house to die, under the stove, while we slept. We were not surprised.
Oscar was his own self, a friend to us on his own terms. He would disappear for days at a time and come home all beaten up, welcoming our attentions, eager to have us take the burrs from his eyes. He brought his wives and children to the barn for Pa to “squirt the cats” (with milk into a pan from Buttercup the cow), but we could never get close enough to tame any of them. Oscar, however,  would often rube against our legs with obvious affection.
A similar friendship between dogs sticks in my memory because our graduate school years were blessed with a yellow and white Collie, Skates, and her small  pal Toby. I can’t even imagine it now, but in those days we just let the animals out for their exercise during the day. We never knew who owned Toby or where he lived, but one day Skates didn’t come in when called. I decided she was probably off with Toby, romping on the University of Wisconsin campus lawns across the railroad tracks. Sure enough, that’s where they were, and they came joyfully home when I called.
The most caring relationship we saw between dogs was in Los Alamos. Our family had grown up and gone off to college, then their careers and marriages.
After the 2000 fire all the shelters in the area held a dog sale in front of Safeway. I was looking for another blond Collie, but I fell in love with two black and while spotted puppies in separate pens. “I don’t know which one to take,” said I.
“Oh you can have them both for the price of one,” a nice lady crooned. “They were found a week apart in Espanola and went crazy with joy when they saw each other at the shelter.” DeeDee and Scooter went home in our arms, and spent their entire fourteen years taking care of each other, sharing beds and meals, racing through the Pinion or Ponderosa in the woods and through the canyons, tending to their wounds and keeping each other clean–another clear example of the importance of caring friendship between dogs. 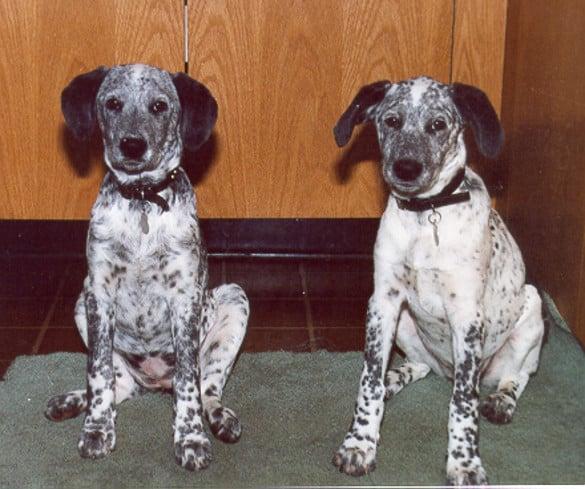 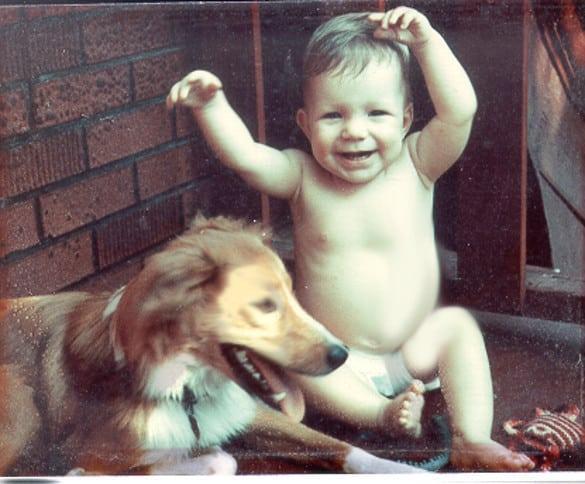