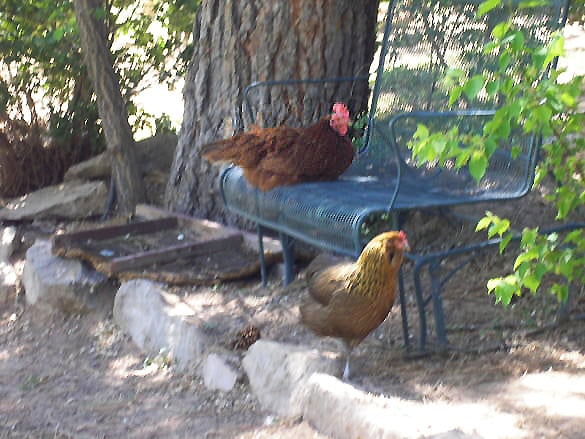 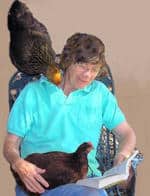 By CARY NEEPER
Formerly of Los Alamos
Had I ever seen an obvious emotion like joy in the Hen House gang? I asked the question as I was reading Marc Bakoff’s book The Emotional Lives of Animals (California, New World Library, 2007). Had I seen sorrow? Fear? In the dogs, yes.
Our dogs—Skates, Poncho, DeeDee and Scooter—displayed what I could call obvious emotion at times. Several incidents stand out as too obvious to write off as “anthropomorphizing:” their tail-wagging joy at the suggestion of a walk in the canyon or a ride in the car.
Camping gear usually incited happy dancing and nosing of hands, until I had to say “No, we’re staying home today.” Then the current dog would drop tail and lay down in a corner, pouting.
On another vein, at first, Poncho hated riding in the car, refusing to get in when required, until he experienced some Kentucky Fried Chicken at a road stop on our way to Flagstaff. From then on he would race to the vehicle and hop in.
As a puppy, Poncho also exhibited intense fear one day after joyfully greeting a coyote at the back fence. The two canines were nose to nose, silent for a moment. Then, suddenly, Poncho turned around and raced for the house, his tail tucked low and his body curled into a sorry lump. I’ll never know what the coyote said to the puppy, but it couldn’t have been very nice.
So what about the birds? Did any of the chickens, ducks, geese or the two turkeys give us good reason to call their reactions emotional? Those we imprinted, having been raised from chicks in the house, were glad to see us as adults whenever we went out the back door—calling and running toward us, or sitting under our arm (even falling asleep there).
We humans have had unique relationships with dogs, developed over thousands of years. However, domestic birds have usually been treated as food, so we are not as familiar with the subtleties of their vocalizations and body language.
A few memories of the Hen House gang do stand out. I realized just a few years ago that very often, when I passed a chicken in the yard, she would mumble a quiet “brk brk.” Our first sitting hen pecked me angrily when I reached in to help the noisy egg that was trying to hatch. Then she understood that I was being very careful to free the new chick from its sticky connection to shell, and she sat back and watched patiently.
Lucy and Bobbie, the geese, hated to be touched. So did the ducks. They would run until I could trap them in a corner. Then they would fight off my hug with hefty struggles until they realized I was trying to examine a sore foot or take them through the deep snow to swim in the house bathtub. They were also very eager to come close when they saw that I was about to offer them a bit of cracked corn.
The Khaki Campbell ducks usually approached very closely with a quiet “mack mack” only after it had rained, for they knew I couldn’t resist their insistence on finding the trowel and digging up some wet mud full of worms. Is joy the right word for their enthusiastic gobbling of wiggly prey? The two miniature mallards showed eagerness and no fear of my shovel when I was digging in the garden. Was it trust I saw as I was trying to turn over the soil full or juicy worms. The small ducks were right under or next to the shovel.
Shouldn’t we take for granted the natural reactions of animals? Apparently we share similar emotions. Haven’t we all come from ancient ancestors? We share similar chemicals that have developed to keep our bodies in tune with what Earth provides.
Recently we have learned that we also share animal behavior that originates or is affected by similar areas in the brain. Even bird brains have similar functions to ours, though their brain architecture is quite different. So why shouldn’t our experiences elicit similar emotional reactions?
Menu
Los Alamos
18°
Clear
7:08am5:27pm MST
Feels like: 18°F
Wind: 0mph W
Humidity: 84%
Pressure: 30.33"Hg
UV index: 0
FriSatSun
36/19°F
43/25°F
41/23°F
Weather forecast Los Alamos, New Mexico ▸