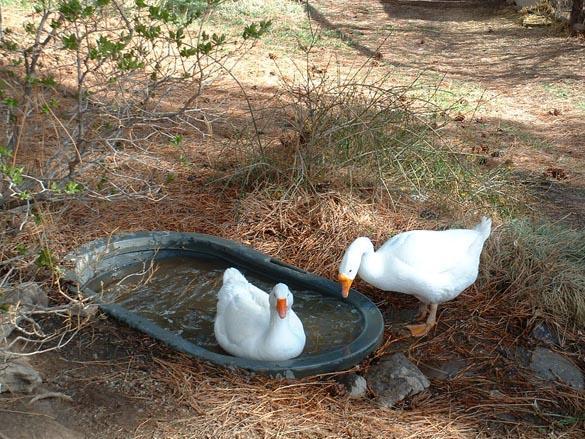 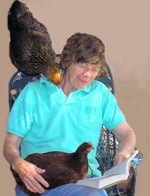 By CARY NEEPER
Formerly of Los Alamos
After our forty years raising domestic birds and dogs, including them in our family, I can’t resist celebrating the wonderful studies done lately on animal sentience.
There are many books recently published, some on best-seller lists—several on octopuses, their inventiveness, and their interest in relating to humans. Many books describe enlightening interactions between humans and other animals. Some of the most poignant stories describe how to relate with domestic herding animals and horses.
The article “Brainiacs” in the recent National Geographic describes a girl in Seattle who has collected many colorful trinkets– gifts, sometimes delivered at her feet– from the crows she feeds with dog food and peanuts. Repeated studies have confirmed that birds and their offspring react with angry cawing to masked faces.
Research on wild birds that hide thousands of nuts have found that a large percentage of the nuts are remembered. Squirrels hide their nuts in different locations. GPS tracking confirms that the nuts are segregated by type.
The famous parrot Alex mastered English words for “…sounds, colors, objects, numbers, and shapes.” He used short English phrases meaningfully.
Other studies have found that songbirds, hummingbirds, ravens and cetaceans and “a few other species” also imitate purposeful sounds like words.
Comparative brain studies have found that the birds’ palliam area of their brains resemble mammals’ neocortex, where sophisticated thinking is done. Differences in bird and mammal brain parts have shown that mammal parts are stacked. Bird brains are not, but the neurons are more dense. Problem solving studies have been done (without prior training) in which food is visible. Access to the food requires several steps using simple tools, which is no problem for some birds. It is well known that crows are good at tool making.
Parrots, jays, ravens and crows are the smartest, according to the National Geographic, but many others are capable of some puzzle solving, tool use, learning from observations, vocal learning, socializing, remembering episodes from the past, and playing.
I had some fun remembering which of these talents were obvious in our Hen House gang of ducks, geese, chickens and two turkeys. Over four decades, we did not see any problem solving or tool use, but their socialization skills were good. They respected each other, as seen in their sleeping and nesting preferences in the hen house and yard. They flocked together in the half acre of the larger yard peacefully.
They also responded to our presence in the yard. Verbal commands were not as successful as physical guidance, but a “shut up” demand to a noisy goose outside Don’s office window elicited an immediate and lasting response. Play and grooming were noticeably exuberant when we introduced the small pond made from a stock tank. The geese had been very creative in using a small tub for grooming, and they loved their occasional winter swim in our bathtub.
The strongest indication of brains at work were in at least three interactions:1) the determination of Lucy Goose to nest where she wanted to nest and not where I strongly suggested; 2) was the remarkable gathering of all the birds and dogs and quiet bird talk at me when turkey had just died at the Hen House door; 3) was Mrs. Campbell’s coming unusually close to me with a quiet “ackack” and bill-pointing to my trowel. It seemed to happen every morning after a good rain. I got the message loud and clear, picked up the trowel, and turned over a scoop of wet mud so the duck could gobble up the many large worms it contained. That personal communication will live always with me as a warm memory and evidence of the duck’s personhood.
Menu
Los Alamos
77°
Thunder
6:07am8:15pm MDT
Feels like: 77°F
Wind: 13mph SSW
Humidity: 34%
Pressure: 30.35"Hg
UV index: 10
MonTueWed
79/59°F
79/59°F
79/59°F
Weather forecast Los Alamos, New Mexico ▸