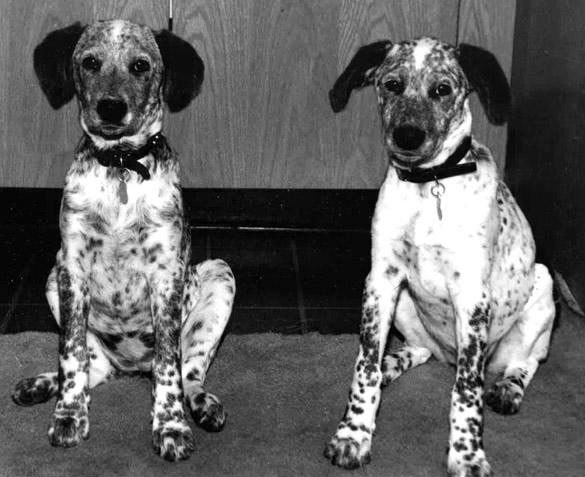 These sisters lived for 14 years and took care of each other every day of their lives. Courtesy photo

By CARY NEEPER
Formerly of Los Alamos
A former Professor of Anthropology, now at Arizona State University School of Human Evolution and Social Change, wrote a chapter in the book Caring Economics: Conversations On Altruism And Compassion. “Altruism Reconsidered”, Professor Joan Silk called it.
She chaired a discussion in the book that compared human gratitude and our “…ability to grasp long-term implications of one’s actions” with that of animals. The discussion, which included the Dalai Lama, took place in 2010 at a conference in Zurich on Altruism and Compassion in Economic Systems.
Silk’s group began with a look at the word altruism. She stated that it is common in animals. It is seen in their natural behavior, and is somehow related to genetic fitness, the ability to survive and reproduce. More social animals seem to survive than nonsocial ones. In humans, even more so in apes, altruism seems to be limited to members of one’s group.
However, the Dalai Lama added that “…with the help of intelligence, compassion can be enhanced.”
Silk suggests that flexibility distinguishes humans from animals, who run primarily on genetic programming. I’m not so sure. The Dalai Lama countered that it’s our long-sighted or holistic view that allows us to be more compassionate, that “…care for each other is biologically essential for our survival.” Isn’t that true for animals, also?
My several decades of experience with the Hen House gang suggest that domestic birds can express concern for each other. They all gathered around turkey when she died, and they stayed there to tell me about it, hovering noisily over her quiet body lying in the Hen House doorway.
My duck Ms. Campbell came running from the nest one morning, obviously distressed, quacking loudly at me. I found that one chick had died in the nest that night. Even more convincing was the way our dogs cared for each other all their lives. They had been littermates, found a week apart in the streets of Española after the fire in year 2000. I was told that when they saw each other in the shelter, they went crazy with joy—licking and tumbling around together.
During that summer’s dog sale in front of Safeway, they were penned separately. One puppy caught my eye, a white shorthair dog with smudgy black spots.
Then I saw the other one. I couldn’t decide which dog I wanted. “They are sisters,” someone said. “You can have both for the price of one. They’ll take good care of each other.”
I took the challenge, and the dogs lived a full 14 years keeping each other clean, checking eyes and ears and bottoms, sharing their bedding and food.
Was this sibling love or instinct? Does it matter? The caring lasted through all their days. The dogs were keenly attuned to me whenever I expressed distress or anger at something frustrating, even when it was not aimed at them. They picked up on the negative emotion and reacted to it with obvious…concern? Anxiety? Altruism? Are the definitions meaningful, if applied only to us humans?
Menu
Los Alamos
63°
Fair
7:20am6:18pm MDT
Feels like: 63°F
Wind: 5mph SSE
Humidity: 25%
Pressure: 30.07"Hg
UV index: 2
MonTueWed
70/46°F
52/34°F
54/36°F
Weather forecast Los Alamos, New Mexico ▸