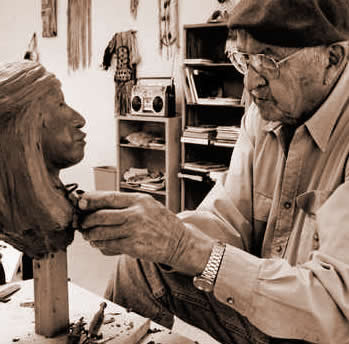 Internationally collected and admired sculptor, painter, and teacher Allan Houser (1914-1994), is back in the Santa Fe spotlight in a major way this summer on the 100th anniversary of his birth.

Beginning Aug. 3, five large scale artworks by the famed Chiricahua Apache sculptor will be displayed in the exhibit “Footprints: The Inspiration and Influence of Allan Houser” at the Museum of Indian Arts and Culture (MIAC), accompanied by an assortment of life-size and monumental sculptures by notable artists who either studied with Houser, worked with him at his studio, and/or were influenced by him.

While various other Houser shows are being mounted to commemorate his centenary, MIAC director Della Warrior (Otoe/Missouria) conceived this show with the aim of emphasizing Houser’s legacy.

“What we are trying to demonstrate is his legacy extends far beyond his own works because he influenced so many artists,” Warrior said. “We’re concentrating on the monumental sculpture, but he influenced hundreds of artists, including painters, to develop their own artistic style and become themselves as artists. To look at this array of artists from tribes throughout the nation is a profound statement about his ability to influence, generate, and excite students.”

Preparator Andrew John Cecil is installing the monumental sculptures for the show, which will be on display Aug. 3 until May 31, 2015.