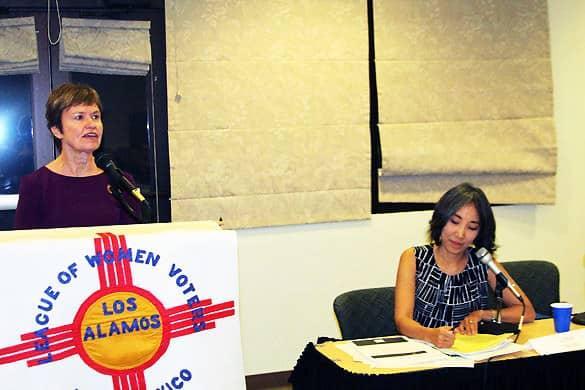 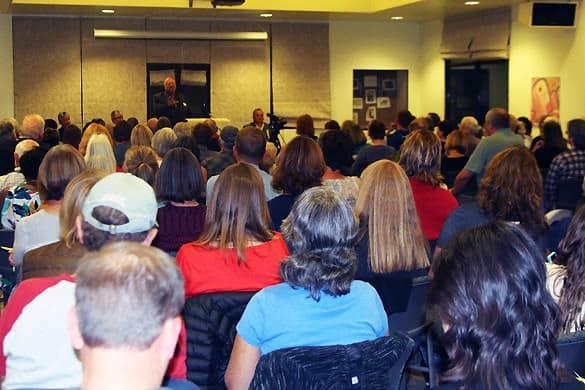 An overflow crowd turned out for the League Forum and listened to candidates for House Dist. 43, sheriff and Magistrate and Municipal judge share their views. Photo by Bonnie J. Gordon/ladailypost.com
By BONNIE J. GORDON
Los Alamos Daily Post
bjgordon@ladailypost.com

Democrat Christine Chandler is running on her skills, record and experience. The three qualities she said she would bring to the Office of House Dist. 43 are her ability to listen, her interest in studying the issues and her willingness and ability to compromise.

Chandler pointed to her experience on the Los Alamos County Council wrestling with code concerns as an example. She made sure the concerns being raised were fully addressed and read codes from other cities and collaborated with the other councilors and County staff, she said.

Management of the Los Alamos Animal Shelter and the study of the small module nuclear reactor proposed for Los Alamos were two other thorny issues where Chandler honed her skills. She also pointed to her time as an in-house lawyer at Los Alamos National Laboratory as an important learning experience.

“These are not skills you learn overnight,” Chandler said.

Republican opponent Lisa Shin stressed her own experience as a small business owner. She promised to use tax dollars efficiently to create more opportunity in New Mexico. She said funding education is important but seeks to rely on federal grants and business partnerships, as well as sound financial management to improve it, rather than raising taxes.

Shin also said Los Alamos was a model for the rest of the state because of its parental engagement. Shin alluded to wealth as a key factor in the County’s success in education and said she wants to bring more wealth to other counties.

Several times during the debate, Shin alluded to some nefarious scandal involving Chandler, but never clearly articulated what she meant. For example, she said Chandler’s name was mentioned in a lawsuit, but not in what context. Presumably she meant the Regional Coalition of LANL Communities travel expense flap. Records show Chandler did not travel with that group. Shin also said she had “no record of mismanagement of public fund”. Shin actually has never held public office.

Both candidates support reexamining districting in the state to better represent citizens.

When asked about the source of their campaign funds, Shinn said 74 percent of her funds came from outside the district, “from all over the nation.”

Chandler said “70 odd percent” of her funding came from the district, largely from individuals active in the community. Only one donation, from her best friend, came from out of state.

When questioned on medical care, both support expanding telemedicine and other services to rural areas. Shin said she supported funding Planned Parenthood for providing mammograms and PAP smears, but not for providing abortion services.

“I believe in a woman’s right to make her own decisions on health care, without reservation,” Chandler said.

When asked if they had ever sued the County, Shin said no. Chandler said she and her husband sued the county to make sure the election process was fair, opposing inclusion of an “illegal ballot question”.

“It is right for people to speak up for the rights of citizens,” Chandler  said. Chandler reminded voters that she and her husband won that suit.

Asked about ethics, Chandler said she plans to reach out to people who disagree with her and to listen to them. She said her door would be open to citizens across the district. Shin promised to adhere to high standards of accountability and to work together with other legislators on issues they agree on.

Talk turned to taxes, with Chandler expressing support for a broader based income tax that would be more progressive. She proposed stepped up collection of internet sales taxes. Shin said she does not support internet sales taxes and supported lower overall tax rates.

On the issue of gross receipts taxes, Shin said taxing nonprofits was unfair. It has yet to be decided whether Triad, the company that received the management contract for Los Alamos National Laboratory, is a corporate or nonprofit entity. Shin said Triad was committed to helping the County, and that taxation was not the right approach.

Chandler said the $17 million the County would lose if Triad did not pay GRT taxes could not be recovered through negotiations with either Triad or federal entities.

“Every other national lab is paying their appropriate taxes,” Chandler said. “We should tax Triad as the corporate entity that it is.”