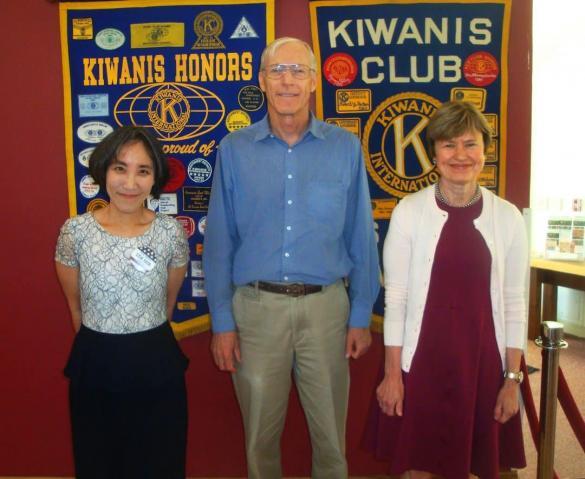 Candidates appearing recently at Kiwanis, from left, Lisa Shin, a Republican unopposed in the GOP Primary, and Peter T. Sheehey and Christine Chandler, both Democrats, who are running against each other in the Democratic Primary, all seeking the District 43 seat in the New Mexico House of Representatives. Photo by Don Casperson

Sheehey and Chandler, both currently serving on the Los Alamos County Council, are running against each other in the Democratic Primary Election, each seeking their party’s nomination for District 43 representative. Shin is unopposed in the Republican Primary.

Kiwanis drew names to decide the order in which the candidates would speak. Each one then had five minutes to address his/her qualifications, reasons for running, and goals if elected.

All three candidates listed improving education as an important goal—but their views on how to accomplish the improvement differed.

Christine Chandler, a Democrat, told Kiwanis that she spent 27 years as an attorney at Los Alamos National Laboratory. She also worked for four years as a legislative analyst for the Senate Judiciary Committee.

“I know the Legislature well,” she said. “I understand the system.” She said she is a very careful researcher, and she believes she has the necessary skills to be a good representative.

She is a member of the Los Alamos County Council now, and she also served on the council about 20 years ago. Her record includes terms as both council vice chairwoman and council chairwoman. She said she helped negotiate with the Department of Energy for land, and helped build agreements with San Ildefonso Pueblo. We are  now developing the land for which she negotiated, she said.

She can work with people politically across the aisle, she said, stating that she is not politically dogmatic and  that her approach is to negotiate with stakeholders to try to find solutions to problems.

If she is elected, she said, her first goal will be “promoting and improving public education in the state.” She believes that, “A good public education will lead us to everything else,” including economic development. And that, she said, will provide “hope and encouragement” so that our citizens don’t choose to pursue crime and drug abuse.

The improvement of health care would be her second goal, and improving the state’s infrastructure—roads, buildings, and access to broadband—would be her third.

Peter T. Sheehey, a Democrat, is a retired Los Alamos National Laboratory (LANL) physicist and a member of the County Council.

He is running, he said, “because the state needs better government.” As he sees it, there is gridlock now  between a Republican governor and a Democratic legislature. As a result, crime and other problems are increasing.

His approach, he said, is to gather facts, communicate, and decide well.

He would like to see the environment preserved and renewable energy and health care increased. His supporters are willing to vote for him again, he said, because he has done the things he said he would do.

He commented that the Legislature “needs more scientists.” All too often, he said, “when science is ignored or misunderstood, society suffers.”

Science can be valuable for the individual wage-earner; his own life is an example, he said. He grew up in a working-class environment and got a bachelor’s degree in aesthetic studies. He joined the Air Force, and when he completed his hitch, he earned a doctorate at UCLA. As a result, he ended up at LANL, and he has “had a good life here.”

“Good public education has a huge payoff in our lives,” he said. He supports it—from pre-kindergarten through college or a vocational school. Education “costs,” he said, but it also “pays off.” Give people the tools, and they will have “a brighter future.”

He concluded, “My priority is to serve the people of District 43.”

Lisa Shin, a Republican, said she has been “serving the people of District 43 as an optometrist for more than 20 years.”

“I bring a pragmatic, common-sense approach,” she said.

She added that  she is “fiscally responsible.” She said that in her practice, she has saved money by buying good, used equipment rather than brand new, very expensive devices.

Citizens need to save for a rainy day, she said. Our county buildings are too expensive. “Let’s not increase public debt ,” she said. “…I am the only candidate here who fought for the taxpayer.”

In public health, the economy, and education, she said, New Mexico spends more than the surrounding states and gets poorer results.

She supports reform of Medicaid and elimination of Medicaid fraud. Medicaid should exist only for those who really need it, she said, and she would like to see work requirements for recipients.

“I support policies that are focused on jobs,” she said. New Mexico’s  unemployment rate is high. “I know what it takes to get people working again.”

In a later article for the Los Alamos Daily Post, she said, “Expanding pre-K access is a positive step forward for New Mexico’s children. Research shows the benefits of early education, especially for ‘high risk’ kids living with poverty, abuse, and neglect.…” However, she wants to see “public-private partnerships and community-driven initiatives,” and she believes an existing, unacceptable “regulatory burden” is forcing pre-K schools to close down.

Sheehey said, “Virtually every teacher I talk to says they’re spending too much time testing.” Some testing is necessary, he said, but not this much. “Let teachers teach.” And, he added, put some of the money saved into improving teachers’ salaries.

Chandler said education is seriously underfunded. “I think we should spend less money on the Public Education Department,” she said. “Move it to local control … Give the money to the school districts and elected school board.”

Kiwanis member Paul Cunningham said, “I think education is a critical issue for the state.” He feels that we have failed to improve education even though we have put more money into it. He would like to increase local control and give teachers more time to teach. He asked the candidates if they would support a voucher system to return control to parents.

Chandler  said, “I would not support that.” She believes  it would mean a cut in funding for public schools—and she supports having good public schools for all.

Sheehey said he supports innovation—and he noted the charter middle school that is expected to open here soon. However, he said, “I agree with Chris. I support public education first.”

Shin said, “I  definitely support a school voucher system … Let parents choose … We do it in pre-K … I am the only candidate here who supports school vouchers.”

Linda Daly asked the candidates whether they would support applying sales taxes to what are now non-profit tax-exempt organizations—churches, YMCAs, and the  Kiwanis Club of Los Alamos, N.M., for example.

Sheehey said that such a proposal is part of a 360-page Republican tax-reform effort. Sheehey said, “We do need reform,” but not by taxing non-profits. He would rather tax Internet transactions.

Chandler said there might not be “one simple, blanket answer.” If the contract to manage LANL goes to a large non-profit, she said, Los Alamos County might  have to argue for the right to tax it. In general, however, she indicated that non-profits should not be taxed.

Shin indicated that, in general, “I don’t support taxing non-profits.” She added, however, “There are abuses” in non-profits, and they need more oversight.

Doug Hemphill asked what White Rock (and, by extension, Los Alamos) could do to attract more business.

Shin said, “We desperately need regulatory reform.” She said that one restaurant owner in Cuba told her that his business is being “overwhelmed” by strangling requirements.

Chandler said that cities elsewhere (in Arizona, for example) “have excellent educational institutions” that lure in business. She said better schools—including trade schools and business schools—might help. The regulatory reform argument is “a red herring,” she said.

Sheehey said there are regulatory problems in our county, but what we need to lure more business is a “strong, healthy, educated workforce.” He also noted the need for good broadband (for use in telemedicine, for example.).

Charmian Schaller asked the candidates to describe their political alignment.

Chandler said, “I don’t believe in the self-labeling process.” She said she “approaches each problem on its own merits.”

Shin said she is “conservative,” but also “independent.” “If a Democrat has a good idea,” she said, “I support it. If a Republican has a bad idea, no.” She indicated that she would rather not describe herself with a label.