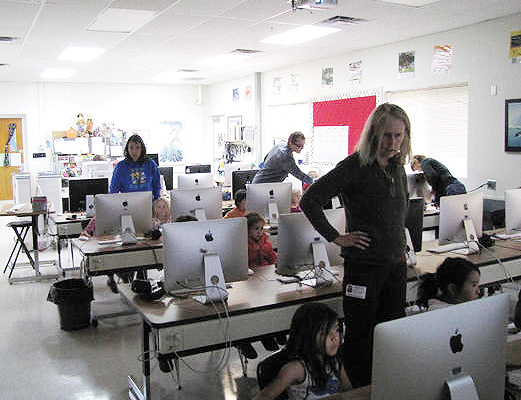 This week is Computer Science Education Week (CSEdWeek) and dozens of Los Alamos computer professionals are fanning out to northern New Mexico  elementary schools to introduce youngsters to the joys of programming and promote interest in computer science through an Hour of Code.

The Hour of Code takes place each year during Computer Science Education Week. CSEdWeek is held in recognition of the birthday of computing pioneer Admiral Grace Murray Hopper (Dec. 9, 1906).

The Hour of Code started as a one-hour introduction to computer science, designed to demystify “code” to show that anybody can learn the basics, and to broaden participation in the field of computer science. It has since become a worldwide effort to celebrate computer science, starting with 1-hour coding activities but expanding to all sorts of community efforts.

Visual programming is a fun and easily understood way to teach the logic of coding. Exposure to visual programming lays the foundation for text-based programming, a more complex activity.
The tutorial is targeted for kids ages 8+ and those trying coding for the first time.

Originally conceived by the Computing in the Core coalition, Code.org® organizes CSEdWeek as a grassroots campaign supported by 350 partners and 100,000 educators worldwide.

In July of 2013, the Computing in the Core coalition members agreed to allow Code.org to organize that year’s CSEdWeek week around a new idea and theme, the “Hour of Code.”

That year, the first “Hour of Code” themed CSEdWeek reached more than 15 million students and over 35,000 events across 167 countries.