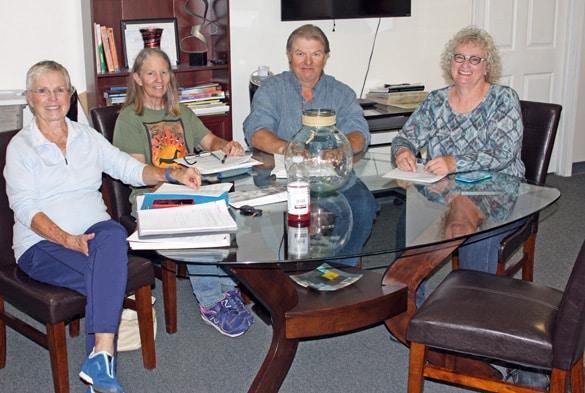 As community input on the Los Alamos County’s bike flow trail project is collected, members of the equestrian community hope their perspectivehot on the project is considered.

A few local horseback riders recently spoke with the Los Alamos Daily Post about the bike flow trail and shared their thoughts on the primary proposed location for the trail, Bayo Canyon.

As Nancy Boudrie said, the hope is County staff will look to other locations rather than the canyon for the trail.

“We would like to see them (the County) seek an alternative to the route through Bayo Canyon,” she said.

Pajarito Mountain was the original site proposed for the flow trail, Amy Rogers said.  An alternate location was sought due to the lengthy private land transfer process between the ski club and Mountain Capital Partners, LLC. Pajarito Mountain may or may not present the possibility for an alternate location due to the private ownership of the ski hill and the necessary process for using County funds to build a flow trail in this area.  However, Pueblo Canyon or other existing County locations may present workable alternative sites.

One issue horse owners have with having the bike flow trail in Bayo Canyon is that it would limit horseback riders’ access to trails in the canyon, June Wall said.

“Bayo Canyon is the only access we have off the stable area … that’s a big concern,” Wall said.

In a written statement, Louis Schulte explained, “Bayo Canyon is particularly important to the horse community as it provides the only access for equestrians to all backcountry trails. The bicycles-only Bayo Canyon Flow Trail has the potential to leave the horses on North Mesa landlocked,” he wrote. “The most recent designs discussed for the bicycles-only Bayo Canyon Flow Trail show crossings of the multi-user trails several times.  In some areas bicycles will be moving at high speeds. Complications arising from encounters between nearby high-speed bicycles from other trails users presents potential safety concerns.”

Accessibility and safety are not the only concerns some citizens have. Other issues that were raised include understanding the true cost for the project, liability issues, and traffic congestion at the trail head once the flow trail is constructed.  Rogers also questioned if the flow trail is consistent with goals in the 2016 County’s comprehensive plan, which states, “Develop and maintain safe horseback riding, hiking and biking trails in an environmentally sound manner”. Additionally, there are concerns about the preservation of historic features in Bayo Canyon.

The group of horseback riders have made their concerns known to the County. Boudrie said they have attended Open Space Board meetings, Parks and Recreation Board meetings as well as a meeting with County Manager Harry Burgess.

“He did listen to us intently, and I think he is considering what he can do for us,” Boudrie said.

Additionally, a petition is being circulated in support of an alternative location. The petition language: “We, the undersigned citizens of Los Alamos County, wish to register our opposition to the location of the bicycles-only flow trail project in Bayo Canyon. We support the exploration of a bicycles-only trail in another location with less local user conflict and better infrastructure for bicycle tourism.”

Rogers emphasized they are not against bicyclists.

“I do think the bicyclists should have some kind of flow trail… the bicyclists do use most of the shared trails in the Los Alamos County System,” she said.

Schulte agreed. “It’s a community issue,” he said. “This is not horses versus bikes.”

Bayo Canyon is located off North Mesa Road, close to the roundabout. The trails in the canyons are used by everyone from bird watchers and bikers to hikers and horseback riders. There are several roads in the canyon, built by Pajarito Plateau homesteaders, that have been added to the National Register of Historic Places.

Schulte also noted that the canyon was untouched by Cerro Grande and Las Conchas wildfires, so it is a popular destination.

Rogers concurred, saying, “It’s just a beautiful place for everyone to share.”

About the bike flow trail

A flow trail takes the bicyclist on a roller-coaster like experience, with little pedaling or braking needed. The proposed trail for Los Alamos will be unpaved although there could be a potential for wooden crossings, he said.

Los Alamos County Council approved $50,000 to pursue a pilot project on County-owned land. This pilot project was intended to be the bike flow trail.

Peterson also reported a request for proposals (RFP) was awarded to Mountain Capital, LLC. The company is tasked with evaluating the original proposed site for the flow trail, Bayo Canyon, as well as evaluating alternative sites that meet the criteria for a bike flow trail. Alternative sites are being measured with a set of criteria, which includes topography, which side of a canyon the trail would be constructed on, any endangered species habitat as well as any cultural resources that might exist. Additionally, he said sites will be judged on how well they meet the International Mountain Biking Association’s standards.

For additional documentation on Bayo Canyon and the flow trail visit: