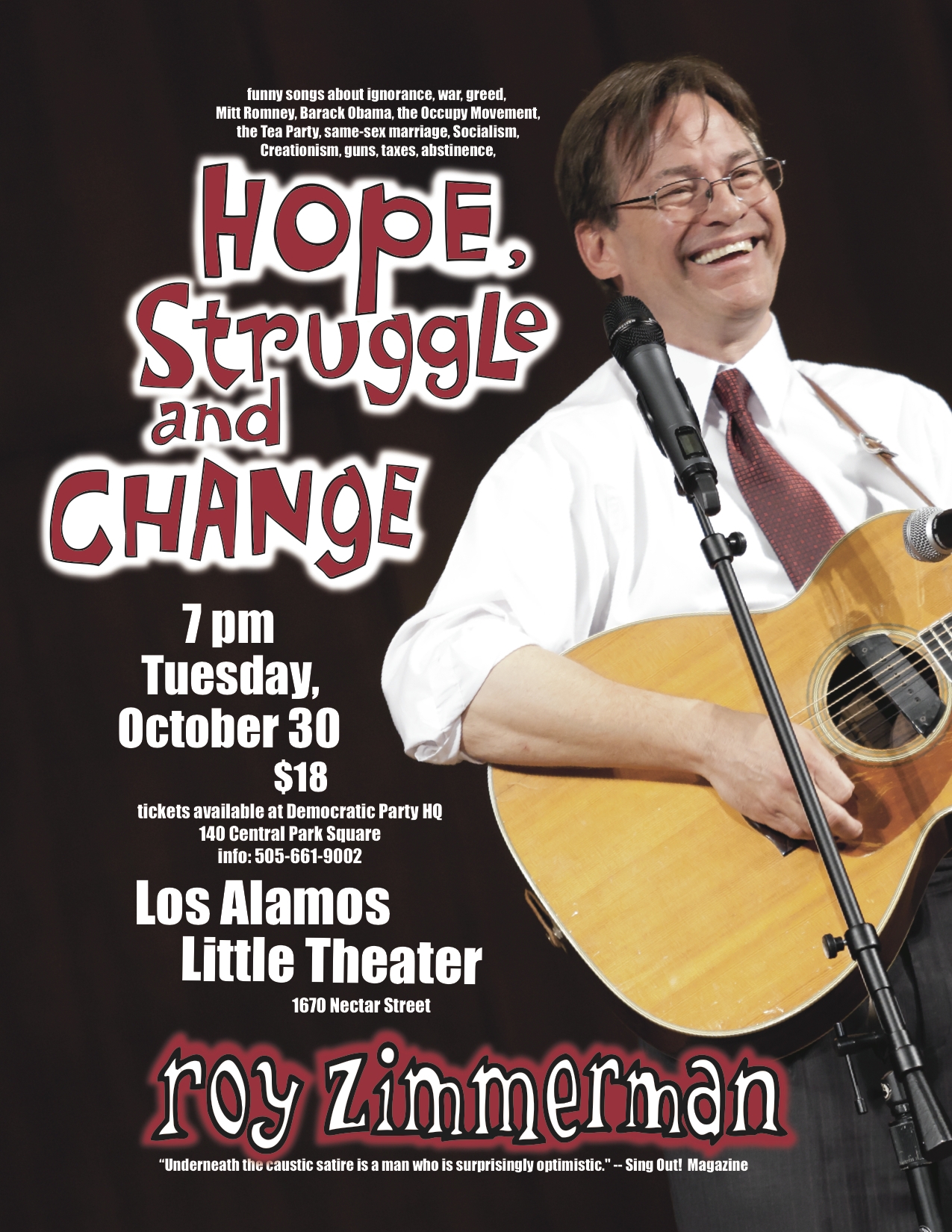 Roy Zimmerman has driven 25,000 miles this year, fulfilling a “campaign promise” to perform his satirical songs in all 50 states.

He brings his live show, “Roy Zimmerman: Hope, Struggle and Change” to Los Alamos at 7 p.m. Tuesday, Oct. 30 for a performance at the Los Alamos Little Theater, 1670 Nectar St.

“Hope, Struggle and Change” is a 90-minute juggernaut of funny songs and comic commentary on presidential politics, the Occupy Movement, the Tea Party, abstinence, Creationism and same sex marriage with a healthy dose of Lefty rabble rousing thrown in.

Think “Daily Show with a guitar.”

Sing Out! Magazine sums it up nicely: “Zimmerman is a guy on the left skewering folks on the right with rapier-sharp lyrics … underneath the caustic satire is a man who is surprisingly optimistic.”

In 13 albums over 20 years, Zimmerman has brought the sting of satire to the struggle for Peace and Social Justice.

His songs have been heard on HBO and Showtime. He has recorded for Warner/Reprise Records and profiled on NPR’s “All Things Considered.”

He traveled this year with his wife and co-writer Melanie Harby. Did they make good on his 50-state pledge?

There are social targets as well; a lesson in “Creation Science 101,” a lambasting of the “Defenders of Marriage” who oppose same-sex unions, a “Sing-Along Second Amendment.”

In the show’s title song, Zimmerman wears his heart on his Left sleeve.

“Hope and Change is what you voted for,” he sings, “… but you know the slogan always needed just one more word: Hope, Struggle and Change.”

“Satire’s harder to write now than it used to be,” Zimmerman said. “Absurdity has lapped Reality. Ann Romney tells us to unzip her husband and let out the ‘real Mitt’ and I wonder, how do you write something funnier than that?”