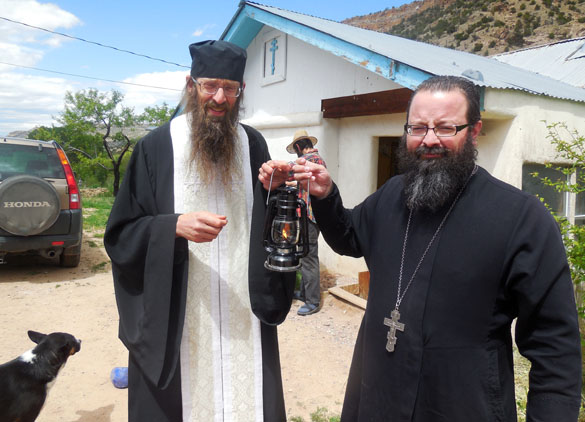 Father Silouan at the Monastery of the Holy Archangel Michael, left, receives the Holy Fire May 17 from Father Theophan Mackey of St. Job of Pochaiv Christian Orthodox Church in Los Alamos. Courtesy photo 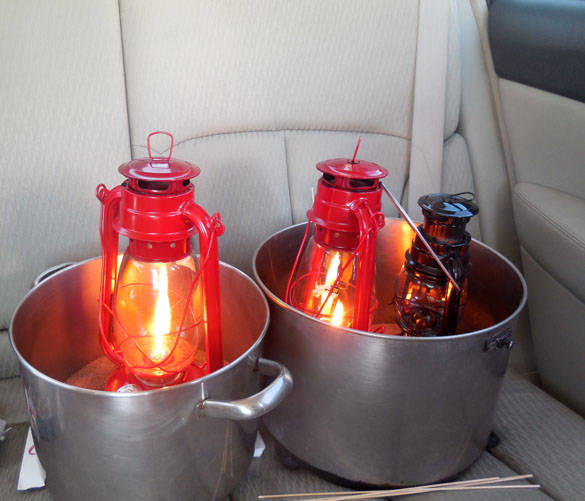 The Holy Fire from Jerusalem was transported from Alamosa, Colo., to Los Alamos in camping lamps set in buckets of sand by Father Theophan Mackey and Emrys Tennessen. Courtesy photo 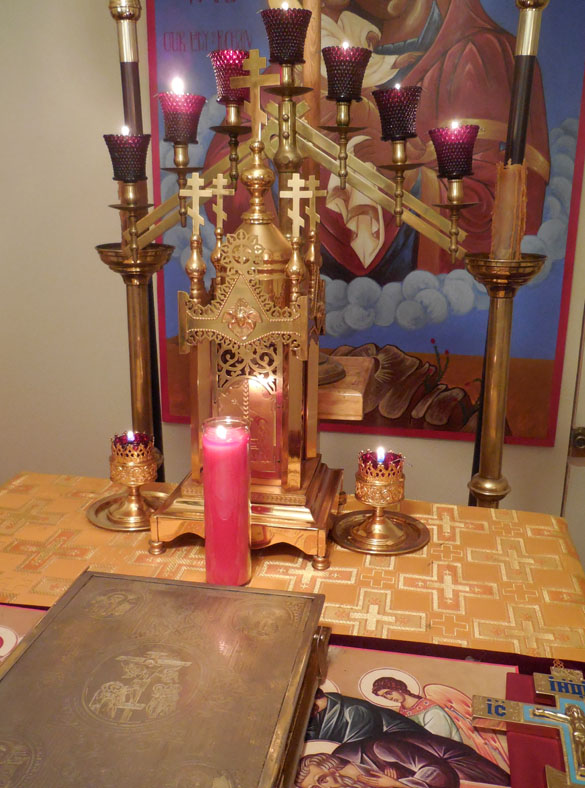 St. Job of Pochaiv Orthodox Christian Church in Los Alamos has received the Holy Fire after its long journey from Jerusalem, according to Father Theophan Mackey.

“The Holy Fire is a miracle that occurs on the eve of Pascha each year,” he explained. “At the appointed time the Patriarch of Jerusalem enters the Holy Sepulcher where Jesus Christ was buried for three days without any fire-making implements and with unlit candles. There he waits for the Holy Fire to descend and ignite the candles after which he emerges from the sepulcher and the fire is passed on to the faithful.”

Father Theophan said lamps lit from the fire are sent to Orthodox churches all over the world. He said this year for the first time a concerted effort was made to make the fire available in the United States, although it has been brought here before by individuals.

“Miracles like this are not to convince unbelievers, but to encourage the faithful,” Father Theophan said. “Being able to receive it and bring it to Los Alamos felt like a miracle in itself. What a wonderful blessing to be able to be part of a miracle that happened on the other side of the world.”

Father Theophan and parishioner Emrys Tennessen traveled May 17 to Alamosa, Colo., to receive the flame from Jordanna Lynch Perry of the Archangel Michael Orthodox Church in Pueblo, Colo. On their way home, they stopped at the Monastery of the Archangel Michael in Canones to pass the Holy Fire to the brothers there. The monastery, which was founded in 1993, is located in the foothills of the Jemez Mountain Range in a remote canyon several miles from Canones.

The miracle of the Holy Fire has been documented each year at Pascua since the fourth century. Father Theophan said there have only been two years in which it did not occur, once when Jerusalem was under Turkish domination and once when it was under the control of the Western Pope and that the Fire has only been given to the Patriarch of Jerusalem.

He said over the past few weeks, the fire has spread person to person, parish to parish, all across the country, and now to Los Alamos. A Facebook page called Come to the Fire indicates where the fire has been received and places to which it will be taken.

“Anyone is welcome to receive the Holy Fire for their home prayer corner,” Father Theophan said.

For more information, contact Father Theophan at fr.theophan.mackey@gmail.com or attend one of his services 10 a.m. Sundays.