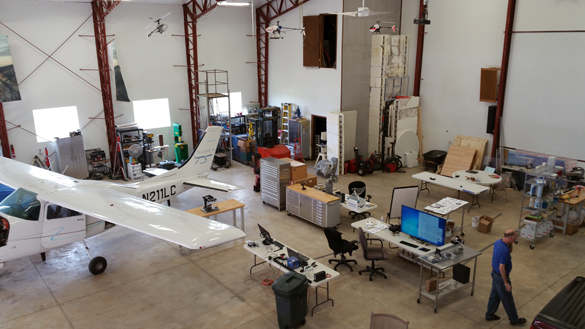 Nothing like having some extra space when you are making a miniature satellite at home. Steve Suddarth walks through the hangar at his house in the Sandia Airpark in Edgewood. The airplane is used in the family aerial imaging business. Courtesy photo 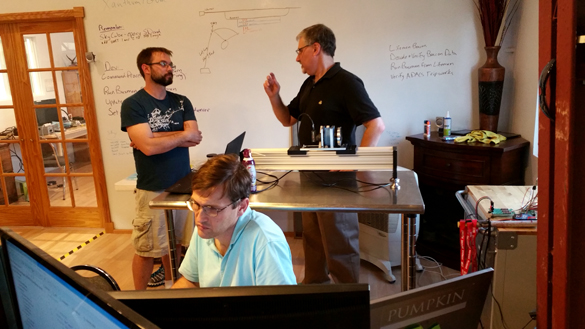 A small crew of space entrepreneurs working out of a 5,000 sq. ft. hangar attached to a house in Edgewood, N.M. were on a mission this summer. In four months of whirlwind effort, they built a miniature spacecraft that will be on board Hawaii’s first space launch from the Pacific Missile Range Facility, at Barking Sands on the island of Kauai. 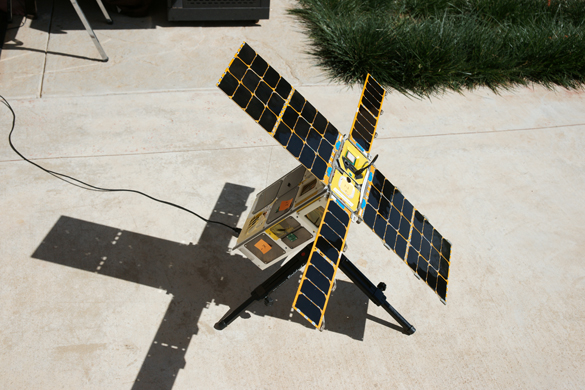 CubeSats fit in cubes or combinations of cubes that are 10 cm (about 2 and 1/2 inches) on each side, so they can fit in a standard space on a launch vehicle. InFocus, is a CubeSat, two cubes wide and 3 cubes high, known as a 6U. It was made in New Mexico this summer and is scheduled to launch soon. Courtesy photo

Part of a new generation of small space technology called CubeSats, the InFocus satellite even with its solar arrays extended looks like toy. It measures barely a foot high, 8 inches wide and 4 inches deep, but its developers say it has been hand tooled by experienced professionals determined to make a significant improvement in imaging Earth from space.

Engineer and programmer, Steven Suddarth, a retired Air Force Colonel, said the miniature satellite has the systems required for a much larger instrument, including a telephoto lens capable of spectacular close-ups of terrestrial features, and a graphic processing unit about the size of a credit card with the speed of a supercomputer that works on less power than a flashlight.

“Our mission is only possible because we have this processor on board,” Suddarth said. “So, a powerful processor, the ability to point and track with a really nice camera with a lens system about as good as we can make for the size we’re going to put in there. And all of it done on a shoestring, privately funded, defense encouraged.”

SPARK is an enlarged version of a vehicle that was originally used for experimental sub-orbital flights at Sandia National Laboratory with payloads of scientific instruments. The launch from Hawaii will be its first low-orbit assignment. Earlier this year it would have been a good match for InFocus, but earlier this year InFocus was only an idea that did not yet exist on paper, and the ORS-4 mission already had a full load.

This is where the Pumpkin bus came in and InFocus caught a big break. The bus is a space canister or chassis that provides a standard container for holding and integrating a satellite payload for delivery. Andrew Kalman is the CEO of Pumpkin, Inc., a San Francisco company that makes the SuperNova satellite “bus,” a key system for making small satellite technologies feasible.

Early this year, Kalman learned that one of ORS-4’s payloads had withdrawn. As he recounted the moment, “The Air Force came to us and said, hey, are you guys interested? And we said absolutely, because you don’t get free rides like that often.” All of a sudden and without much time to spare, there was room for two more CubeSats. Thanks to mutual friends who knew about the Pumpkin bus and the opportunity, the InFocus satellite found its slot.

Suddarth is reluctant to make any claim before there are results to show. “How good the resolution is, how rapidly it takes a picture and how much it can cover. I’m not ready to disclose,” he said. “What I can say is we are intending to push the boundaries of how clear the imagery can be and the various types of imagery we can do, including 3-D reconstructions,” he said. “Building a spacecraft of this magnitude, which is a full-fledged imaging space-craft, in a house in New Mexico, is probably a historic event of some kind.”

Suddarth brings a great deal of experience in high angle imaging. He was one of the developers of an aerial surveillance system called Angel Fire at Los Alamos National Laboratory. After leaving the lab, Suddarth and his wife Deborah started Transparent Sky, an aerial imaging business that, among other roles, provided area residents with real-time views of the dimensions of the 2011 Las Conchas Fire, using a proprietary system called Wide Area Motion Imaging (WAMI). Since his home is located next to the Sandia Airpark, Sudharth built a hanger to house the company’s Cessna airplane.

The hangar was the focus of activity, especially during final stretch.

“It was pandemonium,” said Matthew Ebersviller, the sponsor/CEO of InFocus, a video systems and workflow engineer from Denver who joined up, he said, because he was “always interested in space.” He invested his own money and rounded up additional investors after he heard from a friend that a launch opportunity had come up, if they could build a package on a very short timeline.

Needing a skilled precision milling operator, Suddarth called his daughter Mary (“Mare”) in Oregon, who had just finished college as a marketing major. She was in the midst of planning her wedding, Suddarth said, and still working at a minimum-wage job. He knew she could do the work, so he offered her airfare, expenses and $30 an hour. “She turned out the majority of the parts we made,” he said.

Reinforcements were called in, including the Suddarth’s son Sam, several interns and former co-workers from Los Alamos. The cast came to include optical, mechanical, computer, system and program engineers, as well as a machinist and several technicians. 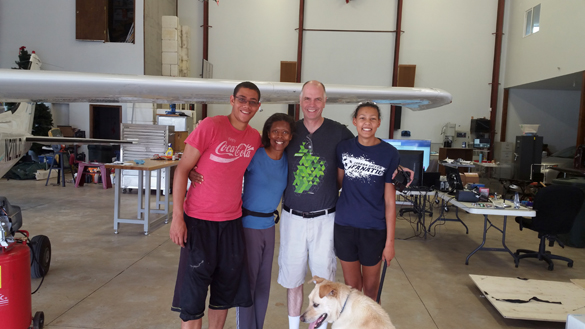 The whole Suddarth family — Sam, Deborah, Steve, and Mary (‘Mare’) — worked on the InFocus satellite at their house in Edgewood, N.M. Courtesy photo

As it turned out, CEO Ebersviller also had marriage plans and actually got married in the midst of the production crunch. He flew to Hawaii earlier this week with his wife for a mini-honeymoon with plans to join up with family members and about 10 friends to watch the launch in person.

Also this week, the launch was postponed two days before the scheduled blast-off Thursday. A new date was set for Friday, but that date has now been cancelled as well. The InFocus team has not been advised of the cause of the delay and no new time has been set so far.

These have not the first hesitations for the maiden launch of the SPARK. In fact, according to Spaceflight Now, the launch date has slipped from October 2013, to April and October 2014 and then January 2015. Luckily for the InFocus spacecraft, the delay that was announced earlier this year opened a window of opportunity for their experiment that, until May, was little more than a brainstorm waiting in the wings.

Philosophically, Suddarth emailed team members Thursday evening inviting them to come by on Friday anyway, “to celebrate the launch that will happen when it happens.”