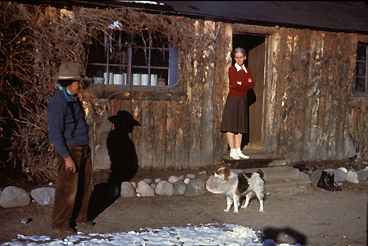 The public is invited to an evening celebrating women’s contributions to history. The Los Alamos History Museum will hold an exhibit opening and two book signings 4-6 p.m. Tuesday, April 1.

The exhibit, Edith and Tilano: Bridges Between Two Worlds, will be in the Museum’s rotating exhibit space through the end of May.

At the place where the river makes a noise, Edith Warner and Tilano Montoya made a simple home beside Otowi Bridge, a home between centuries-old San Ildefonso Pueblo and the Pajarito Plateau with its homesteaders and the Los Alamos Ranch School, and later the Manhattan Project.

Warner and Montoya could never have expected to find world-famous people coming to their door, but when Warner was asked by Robert Oppenheimer to serve dinners to his scientists as a respite from their tense undertaking, that is exactly what happened.

Otowi became a bridge between two worlds. It is a story like no other. Experience their story through historic photos, artifacts and Edith’s original letters and writings in Edith and Tilano: Bridges Between Two Worlds at the Los Alamos History Museum.

Women Marked for History, by husband and wife team Phil Archuletta and Roseanne Roberts Archuletta is a culmination of four years of exploration into the lives of women who contributed to the communities of New Mexico.

These women excelled in many fields, including community and government, education, military, business, healing arts and medicine, entertainment, cultural preservation and the arts.

Roseanne Roberts Archuletta came to New Mexico for the first time in March 2003. She holds a MA from Naropa University and a BA from Pennsylvania State University. She is a dynamic speaker who lectures nationally on topics related to professional and personal development.

Set against a backdrop of war, a scientific achievement that changed the course of modern history, and Joe McCarthy’s Communist witch hunt, An Atomic Love Story: The Extraordinary Women in Robert Oppenheimer’s Life explores the never-before told true story of how world-renowned physicist Robert Oppenheimer lived and loved and the significant impact these women had on his life, career, and legacy.

Writer Shirley Streshinsky and historian Patricia Klaus, in this deeply researched book, delve into the personal life of the man described as the most “intriguing scientist” or the 20th century, and into the lives of the three most important loves of his life: Jean Tatlock, Ruth Tolman, and Kitty Puening.

They were intelligent and ambitious women, and their experiences reflect important changes in the lives of American women in the 20th century: the conflict between career and marriage, the need for a woman to define herself independently, experimentation with sexuality, and the growth of career opportunities. More information can be found at the book’s website, http://atomiclovestory.com.

Both Atomic Love Story and Women Marked for History are available for purchase, tax free, at the Museum Shop.