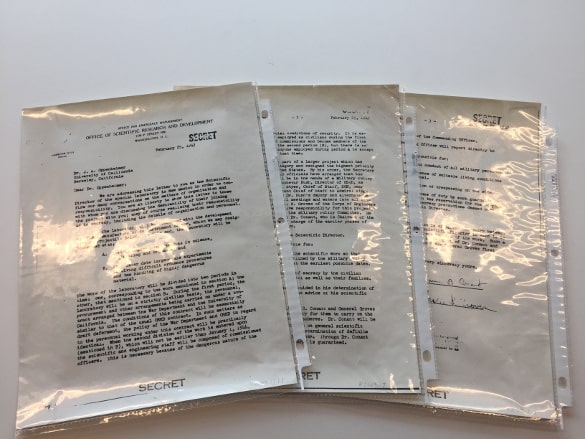 Courtesy photo
By HEATHER MCCLENAHAN
Los Alamos Historical Society
Do you remember the last time you received an important letter—a real letter written in ink on real paper?
In today’s world of texts, instant messages, and e-mails, it’s rare to get a genuine letter anymore. Yet historians are privileged to make discoveries with historic letters and
documents on a regular basis, and sometimes, something really special comes along.
A few months ago, one of the volunteers at the Los Alamos Historical Society Archives and Collections was going through a box donated over a decade ago by Los Alamos resident Bill Bernard when she discovered a letter marked “SECRET.”
Dated February 23, 1943, the letter was addressed to Dr. J. R. Oppenheimer at the University of California, and the signatures on the letter were from James B. Conant and Leslie R. Groves. It was, in fact, the letter appointing Oppenheimer as the scientific director of “the special laboratory in New Mexico.”
James B. Conant was the president of Harvard University and deputy director of the Office of Scientific Research and Development (OSRD), the government organization tasked with coordinating scientific research for military purposes during the war. Gen. Leslie Groves served as the military director of the Manhattan Project.
The letterhead is from the Office for Emergency Management’s Office of Scientific Research and Development, and Vannevar Bush is listed as the director.
The letter is not an original, but it is a rare copy and certainly not something the Historical Society had seen before in its collection. The copy was made while the letter was still classified, as the “SECRET” stamp has not been redacted from any of the pages.
As the letter explains what the laboratory will do—“the development and final manufacture of an instrument of war”—it describes the relationship between the civilian scientists and the military and spells out Dr. Oppenheimer’s responsibilities as scientific director. These included the conduct of the scientific work and the “maintenance of secrecy by the civilian personnel…as well as their families.” He was also to keep Conant and Groves informed and was assured that “through Dr. Conant, complete access to the scientific world is guaranteed.” No small task that!
The responsibilities of the commanding officer—not General Groves but his deputy—were also clearly spelled out. The military would be in charge of maintenance of living conditions, the prevention of trespassing, and “maintaining the secrecy precautions deemed necessary by the Scientific Director.”
The letter was then quite clear that the scientific director and commanding officer would closely cooperate, as Conant and Groves had “since General Groves first entered the
project.”
The weight of the world was not yet on Oppenheimer’s shoulders, but it would be. As the letter explained: “The laboratory is part of a larger project which has been placed in a
special category and assigned the highest priority by the President of the United States.”
The pressure to develop the world’s first atomic bomb and to end WWII before thousands of more Americans died would take its toll on Oppenheimer, whose 5′ 10′ frame would be down to less than 120 pounds by the end of the war.
The letter is the official start of it all.
How Mr. Bernard came across the letter remains something of a mystery. During a brief interview, he could not recall how he came to have it.
If you have any information, please feel free to share it with the Los Alamos Historical Society by e-mail at info@losalamoshistory.org. Or, you could write us a letter (P.O. Box 43). 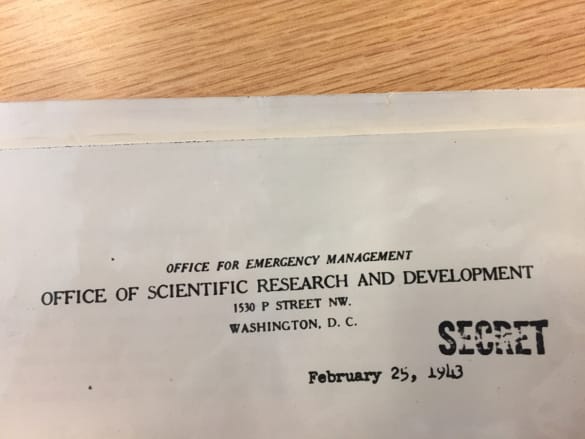 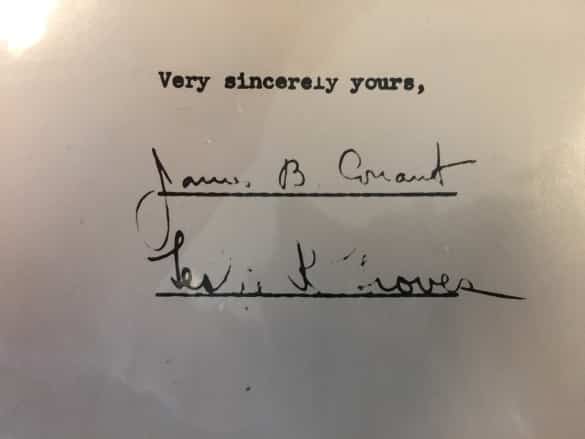