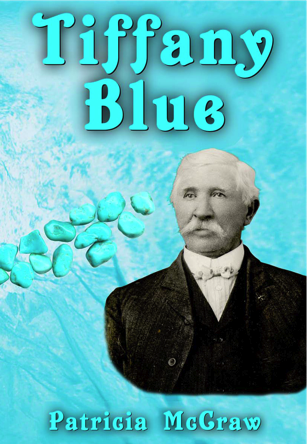 The Los Alamos Historical Society presents a lecture by Patricia McCraw, author of “Tiffany Blue,” at 7:30 p.m. Tuesday, April 15 at Fuller Lodge. The lecture is part of the Historical Society’s 2013-2014 lecture series, “Frontiers.”

Visit http://www.losalamoshistory.org/Events.htm for a schedule and for a synopsis of each lecture. The lectures are sponsored by the Los Alamos National Bank and the members of the Historical Society.

“Tiffany Blue” is the true story of territorial New Mexico told through the extensive documents of the immigrant Irishman who was the superintendent of the once biggest and best turquoise mine in all of America. The book tells the story of Indians, outlaws, governors, sheriffs, adventurers, bandits, the New Mexico Insane Asylum, politicians ─ both good and bad ─ and an assortment of schemers and dreamers all seeking a piece of the American Turquoise Company.

The backers of the American Turquoise Company were titans. They included Charles Lewis Tiffany, the New York jeweler; James Stillman, president of First National City Bank of New York and one of America’s richest men; and Allan Pinkerton of the detective agency.

“Tiffany Blue” begins in north-central New Mexico in 1892 during the scramble to find turquoise, and using over two thousand heretofore unpublished documents that had been kept in an old steamer trunk, it relates the remarkable history of the Tiffany turquoise mine and its superintendent, James Patrick McNulty.

The more remote parts of the Southwest in the late 19th century and early 20th were still wild and dangerous, and the application of territorial law enforcement and the judiciary were subject to the whims of powerful New Mexicans. With very little formal schooling, the wily McNulty, as the front man in the quest for the perfect blue stone required by Mr. Tiffany, shows a masterful ability to hold his own against claim jumpers and land grant schemers, New Mexico politicos and hangers-on who try to wrest the mines away from Tiffany. There is also a years-long “friendly” shooting war between McNulty and the “midnight miners” from Santo Domingo Pueblo.

By combining McNulty’s original letters and her own narrative history, McCraw has woven the tale of a fascinating and nearly forgotten part of the history of New Mexico.