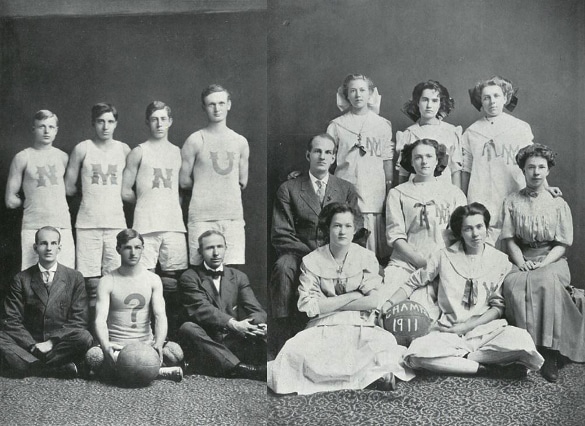 The 1911 men’s and women’s basketball teams from Highlands pose in these historical photos that are featured in the university’s historic photo campaign for its 125th anniversary. Courtesy photo
NMHU News:
LAS VEGAS, NM ― New Mexico Highlands University launched an historic photo campaign on social media in celebration of the university’s 125th year anniversary or quasquicentennial.
Every week Facebook users can visit the Highlands University Facebook page at www.facebook.com/HighlandsUniversity to see what new images have been posted, with many drawn from the university’s Southwest Wind yearbooks dating from 1911 – 1987.
The goal is to post 125 historic photos by the end of 2018 with a wide variety of images.
“This historic photo campaign will build excitement about our Highlands 125 Years Strong celebration,” said April Kent, Donnelly Library’s head of public services. “Donnelly Library will be contributing a wealth of images from our archives that contain fascinating photos and documents dating back to the 1890s. It’s really interesting to see the transformation at Highlands over the years through the changes in campus buildings, the student body, faculty, classrooms, classic cars, and even fashion.”
The Facebook campaign is a joint project of the university’s Donnelly Library, Alumni Office, and University Relations Office.
“The idea is to post the historical photos and encourage the viewer to chime in with their own comments and memories of Highlands,” Juli Salman, Highlands alumni director said. “We think our alumni will have a lot of fun with this campaign, and that it will also stimulate conversations and remembrances among all our Highlands University friends and family.”
Kent and Salman are scanning the historic photos that University Relations then uploads to the university’s Facebook page. A few examples of content to be used includes sports teams, candid shots from events like homecoming, students studying in classrooms, professors at work, musical performances, historic buildings like Springer Hall that no longer exist, and much more.
“It’s like a treasure trove going through the archival images,” Kent said.
The first historic photo posted April 26 featured a side-by-side photo of the Highlands University 1911 men’s and women’s basketball teams.
“People are responding to this historic photo with comments and someone shared their own photo of a Highlands basketball team, in this case the Cowgirls as 1994 RMAC champions,” Salman said. “This is exactly what we were hoping would happen and want the momentum to grow as we post more photos.
“It’s wonderful that our Highlands’ history is preserved in these historic collections and that we’re able to share them via Facebook,” Salman said.
Menu
LOS ALAMOS